Off Off Broadway, Musical
Runs through 8.29.15
VENUE #13: Lynn Redgrave Theatre at the Culture Project, 45 Bleecker Street 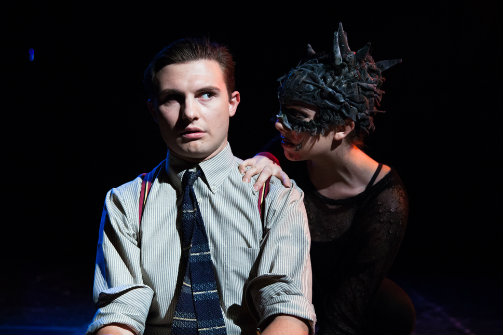 Vinnie Urdea and Charly Dannis in Beware the Chupacabra! Photo by Rachel Esterday.

BOTTOM LINE: Like the mythical creature that inspired it, Beware the Chupacabra! is a serious musical that’s a bit of a hybrid, and alternately stutters and soars.

When the title of a musical has both a mythical goat-sucking beast and an exclamation point, one might well expect a big ol’ campfest, especially at the Fringe Festival. And while Beware the Chupacabra! is many (maybe too many) things, it most definitely is not this.

The show opens with a homeless vagrant (Nicholas Connolly) wandering amidst a rousing carefree dance number celebrating the New Year (it’s 1920). Lest we think this homeless dude is a main character, we quickly move to the working class dress shop where our hero, Teddy Baskins (Vinnie Urdea), works. After his boss leaves, in comes trouble—in the form of Victoria Warner (Caitlin Wees), a high society type who steals one of Teddy’s newest creations after he politely refuses to sell it to her. Victoria returns the dress, but in doing so Teddy gets fired, and somehow Victoria manages to get Teddy to come live with her so he can make dresses for her. And also apparently marry her. But Victoria’s father Arris Warner (Everett O’Neill) isn’t such a fan of Teddy, perhaps partly because he shares a name with one of the men Arris most despises—Teddy Roosevelt. Indeed, Warner has designs on the Presidency, and hopes his cronies in the League of American Democratic Sportsmen (LADS) will support him over that Harding character, a rival who has the gall to be from Ohio.

If you’re wondering where and how we get from all this to a mythical goat-sucking beast most famous in Central and South America, be patient: the word “chupacabra” isn’t even uttered until about halfway through the musical. Eventually, Arris decides he can get rid of Teddy by sending him to Mexico in order to kill the Chupacabra. Teddy is so nice and innocent that he goes willingly, under the supervision of Warner’s minion Jasper Sloan (Connolly again), who is supposed to use the trip to bump Teddy off. They land in a hotel run by Tipo (Robert Moreira), who tells them that no one who has gone after the beast has lived. But the Chupacabra (Charly Dannis) turns out to be more misunderstood than terrifying, and with the help of one of Teddy’s newfangled inventions (a “caller,” worn as a collar), Teddy and the Chupacabra are able to speak with each other; as it often does in stories like this, communication quickly leads to friendship and trust.

Even before the musical begins, the homeless vagrant wandering the house asking patrons for change suggests that serious themes will be addressed. And indeed, the first half of the musical is a sort of critique of capitalism and class structures, in the style of Brecht and Weill. While the Chupacabra survives by sucking the blood of goats and other animals, one of the messages here is that it’s the rich who are the real bloodsuckers. The creative team also seems to be gesturing towards a critique of American imperialism and xenophobia, although this gets a bit muddied when the Mexico we see embodies every sort of stereotype possible. Given that composer Christian De Gré is himself from Mexico, I’m guessing the “Mexico on steroids” aspects of costume and character are intended as a kind of conscious skewering of U.S. perceptions of foreigners, although this could be more explicit. But once Teddy and the Chupacabra meet, the entire piece gradually shifts to become a much more intimate musical, in which two…creatures form an alliance across their differences, with the assistance of a few and in defiance of many others.

The entire twelve-person ensemble is excellent, but there are a few standouts. As Tipo, Robert Moreira is terrific, bringing a much-needed authenticity to what could easily become an overly stereotyped character. Vinnie Urdea is delightfully energetic and wide-eyed as Teddy Baskins; his tongue-twisting “rap” to the townspeople in Mexico is a highlight in a show rich with lyrical intricacies. And as the Chupacabra, Charly Dannis is outstanding, bringing a lovely humanity (not to mention powerful voice) to the strange title character. Partly because of Urdea and Dannis, the scenes between Teddy and the Chupacabra form the emotional core of the show, and their duets are the strongest moments in the score. Kyle O’Connor’s set design—painted fabric panels on frames that turn like pages in a book—is a clever solution to festival limitations. And Ashley Soliman’s richly detailed costumes play a crucial role in character development, and are professional enough for a commercial Off Broadway production, let alone a Fringe show.

Patrick Alberty’s writing (book and lyrics) is quite intelligent, and often quite dense; there’s the feeling that he has so much to say he wants to squeeze in as much as possible. And De Gré’s music is more sophisticated than a typical musical theatre score; it's legit as opposed to pop/rock, in the vein of Adam Guettel’s Floyd Collins. De Gré's orchestrations for piano and woodwinds (flute, clarinet, bass clarinet, and sax) help give his music an unusual sound that is suitable for the time period and subject matter, providing a refreshing contrast to other works of contemporary musical theatre. These writers clearly have a lot of talent, but choosing to co-direct this show as well may not have been the wisest idea: aside from some minor staging inconsistencies, Beware the Chupacabra! meanders a bit and lacks structure and a narrative arc; at over two hours with no intermission, it feels a bit overstuffed. This show doesn’t really know what it wants to be yet, which, to be fair, is often the case with ambitious new musicals. Once Alberty and De Gré figure it out, I suspect Beware the Chupacabra! will be a strong and insightful piece.