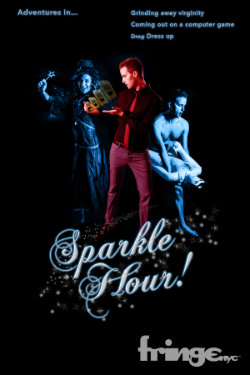 Everything about Philip Markle and his one-man, one-hour, part original-musical and part sketch, Sparkle Hour is bigger than life, chock-full of laughs, and deliciously naughty. In other words, perfect fare for the NYC Fringe Festival where the show is now running through the end of the festival at the beautiful subCulture space at The Culture Project on Bleecker.

Sparkle Hour follows Markle, who is as puckish as he is engaging, as he recounts his journey from adolescence to adulthood. This includes, among other things, being a master player of the online role-playing-game Everquest, coming out at a Catholic youth retreat, and having a one-night stand, care of the hookup dating service Grindr. All the while, we’re treated to a good dose of original music (some of it made up on the spot), lots of (optional) audience participation, way too much personal information about Markle and his turn-ons (one of the funniest moments of the show), and even some free candy.

While some of Markle’s stories are blush-worthy and the delivery given a facade of amateurishness, there is no doubt that we are watching a carefully crafted performance (with help from director Jen Ellison), that vacillates masterfully between tongue-in-cheek and soul-baring honesty. The result is a show with universal appeal, touching on the fear of being different and the power in self-discovery.

(Sparkle Hour plays at SubCulture, 45 Bleecker St, through August 25th, 2013. The remaining performance is Sunday, August 25 at 3PM. Tickets are $15 in advance, $18 at the door and are available at fringenyc.org or by calling 866-468-7619. For more information visit sparklehour.com.)