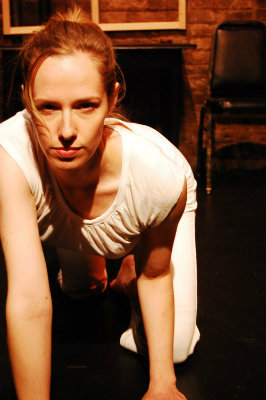 BOTTOM LINE: Although the conflicts at the heart of this play could be further explored, Maura Halloran gives a strong performance, making each of the four characters distinctly different.

Pussy tells the story of the disintegration of a relationship between two poorly matched lesbians and the interferences and observations of both their nosy Russian landlord, and their mischievous cat (known only as Pussy). Actor and playwright Maura Halloran plays all four roles, slipping seamlessly from each character to the next, aided only by minimal props.

Scared by the threat of terrorism, pretentious Brit Jo decides to trade in London for Vancouver. While there, she meets the sweet and insecure Leslie via an online dating site and the two quickly begin cohabitating alongside Leslie’s cat, who has a habit of throwing important documents, like Jo’s immigration papers, out the window. The two are clearly a mismatch from the start: Jo is a self-entitled snob who takes advantage of Leslie; Leslie  has her own issues due to being an “ultra conservative, right wing, Christian” while also identifying as a lesbian. Meanwhile the lonely, and ignorant landlord Anna observes and eavesdrops on the two, giving the audience her own humorous observations (which include disliking lesbians because “they wear a penis on the belt”). She is harsh and critical of the couple but also shows a soft spot when she hears Leslie hysterically crying night after night after Jo leaves.

The most touching and humorous moments in the play stem from Leslie’s counseling sessions with her church’s pastor in which she struggles to balance her conservative Christian beliefs alongside her homosexuality. Leslie has a lot of guilt about her sexuality and asks how Jesus feels about lesbians, unable to find any mention of lesbianism in The Bible. She says, “I don’t want Jesus to die again just because I like softball.”

Actor Maura Halloran shows great skill as a performer, particularly in her ability to convincingly portray four very different characters. Her performances are helped by her dialect coach Patricia Reynoso and her movement director Julianne Fawsitt, who perhaps enabled Halloran to move so convincingly in a feline manner. Pussy’s storyline has many strong and humorous moments, but its climax and drama could have been strengthened if more time had been devoted to Leslie’s struggle to balance her sexuality and her religious beliefs. A glimpse into just what drew Jo and Leslie to each other would have benefited the show as well. As is, Halloran shows herself to be capable of depicting moments of emotional drama as well as giving a strong comedic performance.