Written and Performed by Laura Zam; Directed by Shirley Serotsky 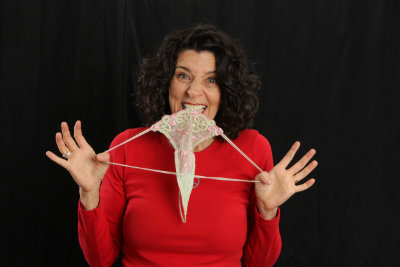 BOTTOM LINE: This moving autobiographical solo show centers on performer Laura Zam's struggle to have a normal sex life while still being haunted by the effects of her childhood abuse.

Given the title, description, and promotional photos for Married Sex, I was expecting a raunchy comedy lamenting the pros and cons of committing to one person sexually for the foreseeable future. Instead, Married Sex is not as lighthearted and raunchy as I’d assumed. The show is, instead, a touching and honest story of one woman trying to embrace her sexuality and have a normal sex life despite being haunted by the demons of her tragic childhood sexual abuse. Lauren Zam, who wrote and stars in this solo show, attempts to merge touching drama with (sometimes wacky) comedy. This is an unusual mix that works well in some places and not as well in others.

At the age of four Zam was sexually abused and her first attempts at sexual intercourse at age 17 show that the trauma of her abuse prevents her from having normal and pleasurable intercourse. Later on in her 40's Zam finds herself married to a seemingly understanding man named Matt (her sexual history in between these two events is skipped over). Zam looks for help from a series of therapists, a sex columnist, and inspirational videos from sex-positive rabbis. To feel more comfortable with her own issues she stages “sex brunches” with female friends in which they openly discuss their sexual issues to gain a feeling of greater acceptance and support.

Zam is a talented storyteller and imbues each scene with ceaseless energy. Her immense appeal as a performer helps to make her show engaging. She uses musical interludes and dance to break up her story and keep it engaging. However, the play has a somewhat confusing beginning, one in which Zam uses comedy to transition to her topic of abuse, one that seemed to make the audience disoriented. While much of the play is consistently funny and rousing, some of the story lags and is unclear. Tightening up her script would really help to make this show shine even more.

Discussing one’s abusive past publicly surely is a difficult feat, and one that Zam shows great bravery in undertaking. The play’s strongest and most touching moments occur when Zam is not trying to bring on the laughs, and instead gives an honest depiction of her struggles to find a normal life and finally recover sexually. Zam’s desire to engage in open dialogue about sex and sexuality is apparent; her program notes her real plans for a women’s “sex brunch” and her devotion to creating support groups for victims of sexual assault. Her devotion to dealing with her own painful story as well as those of others should be applauded. While the promise of bawdy humor might get more audience members in the door, it is the honesty at the heart of this play that really makes it worthwhile.