Tickets for The End of Days are now available through the Fringe NYC website or by calling 866.468.7619.  Advance ticket prices are $15.

The End of Days 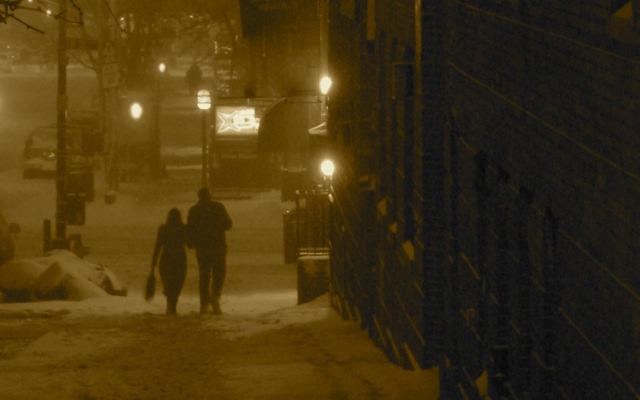 BOTTOM LINE: While not particulary innovative or original, The End of Days is worth checking out due to a handful of heartfelt moments from its two actors.

If the world was really coming to an end, with whom would you spend your final moments? That is the question posed in Jeffrey James Keyes’s new play austerely titled The End of Days.

If you’re Kitt (a photographer played by Adam David Thompson), you would find your ex-girlfriend Nina (an ex-dancer played by Libby Winters), re-hash a bunch of old issues and re-ignite a flame that may have never gone out in the first place.

The beginning of the production is rather awkward -- a tone-deaf ten or so minutes in which the actors talk at each other, not to each other. Playing people who haven’t seen each other in such a long time, Thompson and Winters gloss over the process of taking one another in. Instead of actively listening, they deliver line after line after line in a tensionless space, leaving me wondering what motivates them to speak.

But when they settle into their roles, the actors and the script soar. Winters’ vocal and physical choices grow richly compelling. The sing-songy way she delivers a line like “So tell me about your life” to her ex-boyfriend brings a genuinely nervy vibe to the room that’s brilliant. Her reaction when Kitt leans in for a kiss (a small "ooh" and a facial expression which says "I want you - but I don't - I want you - but I don't") is a rich touch that makes her character three-dimensional. Winters is particularly captivating in a photo shoot sequence; clothes come off and you could hear crickets as she controls the stage with such deliberate choices.

While not as layered as Winters, Thompson is solid as Kitt. He nicely combines suaveness and weakness, playing someone who will get his way whether he nags like a child or backs Nina into a corner like a man.

At times, the dialogue feels a little overwritten. A two-person play is bound to feature verbose characters but sometimes their actions speak for themselves. Kitt says “Why did you push me away?” after Nina exits, but the confusion and pain Thompson conveys with his eyes say it all. There could also be more physical attraction between the actors. The script is saying that these two can’t live with out each other, that they desire each other so much it hurts, that they are drawn to each other like magnets. The actors get halfway there.

I don’t really believe Winters and Thompson put all of their vulnerability on the table, but I can overlook it. Because what I do believe is that they, along with Keyes and director Terry Berliner have collaborated to present an engaging night of theatre with enough winning moments to recommend it.

(The End of Days plays at the Soho Playhouse, 15 Vandam Street, through August 25, 2012. Tickets are $15 in advance or $18 at the door. For more show info visit www.endofdaysplay.com.)