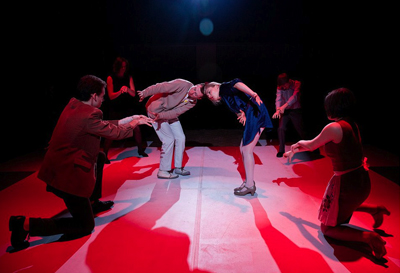 A scene from PINK MILK.

BOTTOM LINE: This play successfully captures the tragic life of Alan Turing, choosing to focus on emotions -- rather than specific dates or historical events -- which are evoked through movement and metaphorical scenarios.

The story of Alan Turing is a heartbreakingly tragic one, but such a richly compelling one that it's a wonder his life has been so seldom explored by artistic mediums. Playwright Alex Paul Young hit gold when he chose Turing's life as one worthy of being explored on stage. Initially a war hero whose brilliance with mathematics aided Britain in ending WWII, Turing was quickly made out to be a criminal after he was exposed as being a homosexual. With a choice of either prison or chemical castration via estrogen injections, Turing chose the injections and later took his own life out of guilt and shame. Young saw a parallel between Turing's suicide and that of Rutger's University student Tyler Clementi, seeing that the tragedy of Turing's suicide is a phenomenon still playing out today.

Young and director Brandon Powers utilize dance and motion to tell Turing's life story, having the actors move in manners to express joy and sadness. As a teenager, Alan (Joe McManus) is socially awkward, preferring science over interacting with his peers. His love for his experiments is embodied through actor Ben Barker who shows how science replaces his affection for other humans. His homosexuality is at first evident through his intense friendship with Christopher (Matt Moynihan). Christopher dies early on due to tainted milk and Alan is left a lonely young man, finding validation by earning gold stars in school and eventually becoming a war hero through his work with mathematics. He finds repreive from his loneliness by sleeping with Arnold (John MacGaffey), a man who seems to be unsure as to whether he actually cares for Alan or if he just wants money to feed him and his mother. Alan attempts to be normal by going on dates with a female acquaintance (Natalie C. Houchins), but his lack of desire for her becomes too saddening. The many authority figures in his life (all played with gusto by Casey Hartley) serve to guide him towards professional achievement. Soon however, he is forced to undergo estrogen injections for the crime of homosexuality and his mind and body both fall apart. The other actors move around in a circle as they announce the many side effects that men experience when taking estrogen and they act out his despair. Turing becomes fixated with viewings of Snow White, and finds escape from his pain by creating his own poisoned apple, choosing the same death as his cartoon heroine.

This production uses innovative means to successfully evoke the sadness of Alan Turing's life and hopefully will inspire other artists to find fodder within it. All of the actors showed great talent in their performances, especially Natalie C. Houchins who had to provide voice and emotions for inanimate objects. However, rooting more of the play in historical events and facts might have been helpful for audience members who did not previously know Turing's story. Nonetheless, this play succeeds in creating a moving interpretation of a man unfairly destroyed by the very country he saved.

(Pink Milk plays at the Gene Frankel Theatre, 24 Bond Street, through August 19, 2012. Remaining performances are August 18th at 9PM and August 19th at 2PM. Tickets are $15 in advance or $18 at the door. To purchase tickets visit fringenyc.org. For more show info visit pinkmilk2012.com.)