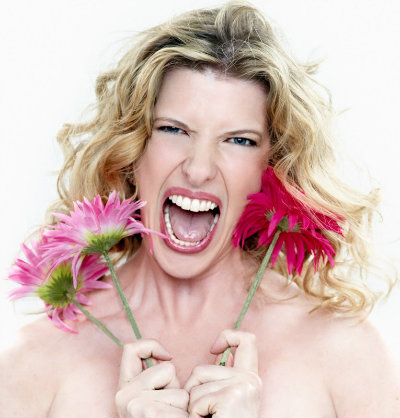 BOTTOM LINE: A comedic musical about a group of New York women looking for a self-esteem boost and the spiritual "Mother" who guides them.

Mother Eve (played by Ashley Wren Collins), the title character in the new musical Mother Eve’s Secret Garden of Sensual Sisterhood, is the pseudo-new-agey and sexually liberated spiritual leader of a pack of problem-ridden New York ladies. The opening number, “Busy, I’m So,” establishes that these women are engaging in the classic New York rat race, but (in a dynamic mid-number twist) that their “busy-ness” is actually covering up a whole range of issues regarding self-esteem, body image, and loneliness. One of Mother Eve’s students (or “petals”) is a serial stalker in love with a married man, one has “sexual tourettes disorder” (“STD”) that causes her to shout out phrases like “ball sack” whenever a man makes a move on her. Another is dumpy. Another unleashes a string of self-criticisms whenever she is complimented. Mother Eve attempts to fix each of these ladies through group therapy sessions with the hefty price tag of $5,000.

The music (by Christian Pedersen — who plays a guitar on stage through most of the show) and lyrics (by Uma Incrocci) provide a strong base for this musical, which features an arsenal of entertaining songs that develop the quirky characters and push them along in their journey toward self-worth. The performers, for the most part, deliver the songs well and I found myself surprised a few times at the breadth of talent (“these girls can tap dance!”). Kirk McGee also gives a standout comedic performance as “Practice Guy,” a sort of everyman on whom the ladies practice their new skills, which McGee delivers with surprising variety and physicality.

I must acknowledge, though, that I didn’t find myself wholly on board with the message of the show. I appreciated that the characters discovered tools to amp their confidence and get more of what they wanted — as well as the sweet bond that grew between them — but I was a little disheartened to see that this seemed so strongly connected to makeovers that washed out each individual’s sense of style, putting them in Macy’s tops and heavy makeup. The dumpy, librarian-like Rhododendron (Alena Acker), in particular, seemed to compromise nearly everything about herself in order to be another pretty, confident girl-in-a-pink-dress. Furthermore, the fact that each of these women can afford a $5,000 spiritual seminal (and that one of them asks her father for an iPhone instead of a tummy-tuck) doesn’t help temper the sense that these are probably not the types of girls I like to be around. I suspect, though, that the writers may still be working out some of these details (as well as a scam-and-detective plot that seemed a bit forced).

Nonetheless, Mother Eve’s Secret Garden of Sensual Sisterhood, is entertaining and pretty damn funny. Fans of the Sex and the City brand of high-heeled feminism will probably love it.

(Mother Eve's Secret Garden of Sensual Sisterhood plays as part of the New York International Fringe Festival at The Players Theatre, 115 MacDougal Street, through August 26, 2012. Remaining performances are August 19th at 8PM, August 21st at 9PM, August 23rd at 4:30PM, and August 26th at 2PM. Tickets are $15 in advance, $18 at the door. To purchase tickets, visit fringenyc.org. For more show information visit MotherEves.com.)