Alice and the Bunny Hole 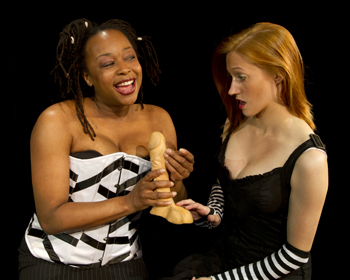 Deena Jiles and Michelle Wood in ALICE AND THE BUNNY HOLE. Photo by Robert A. Terrano.


BOTTOM LINE: This modern retelling of Alice in Wonderland turns Alice into a New York City woman in search of sexual fulfillment. The sexual humor running through this play remains consistent and makes it an amusing and engaging tale.

In this modern day retelling of Alice in Wonderland, Alice (Michelle Woods) is an uptight New York career woman who is stuck in a passionless relationship with Bobby (Josiah DeAndrea) whom she has been with since college. While their flames once burned hot as virginal undergraduates, they now rarely find themselves inclined to have sex with one another and the prospect of marriage seems more out of duty than desire and love. One night, stuck inside during a hurricane, the two make a drunken descision to spice things up by arranging to meet up with another couple for some partner swapping. Unfortunately, due to their impulsiveness and drunkeness they accidentally email a gay couple, mistaking the one named Kelly (Patrick Martin) for a woman. They meet up with the couple at a bar where their mistake becomes quickly apparent. While Bobby is livid and tries to flee the bar, Alice is intrigued by Jerome (Dan Johnson), one of the two who identifies as "pansexual," not homosexual or bisexual, and apparently enjoys sleeping with women from time to time.

The two ultimately leave before anything significant can unfold, but Alice finds herself intrigued by the sexual world buzzing around her, one in which she might find herself finally fulfilled. Her curiousity is further piqued by Bunny (Deena Jiles) who owns a bar for the more sexually eclectic and whose mail (which includes large catalogs for sex toys) keeps getting sent to Alice and Bobby's apartment. While Alice visits Bunny's bar she encounters such characters as The Man with The Tiny Hat (played by co-director Jody R. Person) who is a sort of spin on the Mad Hatter and spends his days obsessing over go-go boy and Bunny's adoptive son, known as The Prince of Hearts (also played by Patrick Martin).The shrinking of the original tale this play is based around becomes metaphorical, with Alice lamenting on how small she feels as she loses direction in her life, fearful of how to save both her professional and sexual identities. In the end, Alice might learn the importance of sexual passion, but the she has much to teach the other characters regarding the importance of love.

(Alice and the Bunny Hole plays at the First Floor Theatre @ La MaMa, 74A East 4th Street, through August 24, 2012. Tickets are $15 in advance or $18 at the door. For more info visit elixirproductions.com.)