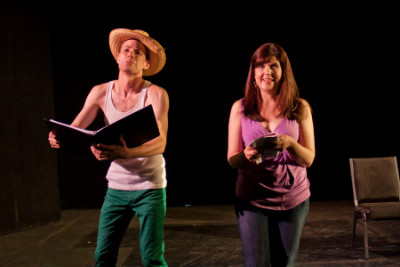 Despite the many lies and fabrications that Penny Nichol (Carol Todd) has put on her resume, she seems to only get cast as mentally retarded characters in small hole-in-the-wall productions like I’m Schizophrenic and So Am I and Autistic Differences. And she’s tired of it. When she encounters Brian Goodwin (played by Brian O’Halloran of Clerks fame) and he alludes to a new agent he’s working with— Mr. C. Randall McCloskey— she wants in. And now that he’s gotten rid of his harelip, she’s more inclined to let him “touch her boobies.”

So as the gang attempts to get ahead in the industry, the mad hijinks and crazy situations ensue in Ian August’s absolutely hysterical and outrageously unique new comedy Submitted by C. Randall McCloskey. In hysterical vignettes we see scenes from the actors' work which mostly features the hysterical Todd foaming at the mouth or mumbling in a retarded stupor.

The ensemble, rounded out by Bob Senkewicz as casting director Dick Whitehead and Steven Mark Friedman as Mr. Kluntz, gels together beautifully under Paul Whelihan’s direction. The humor is heightened every time the minimal props and set pieces are danced on and off stage by the cast while hysterically absurd original music compositions play. This is a highly entertaining and very funny show, although I’d imagine the humor may not be for everyone. But I’m not ashamed to say I laughed my ass off.