Off Off Broadway, Play
Runs through 8.28.11
Bleecker Theatre, 45 Bleecker Street 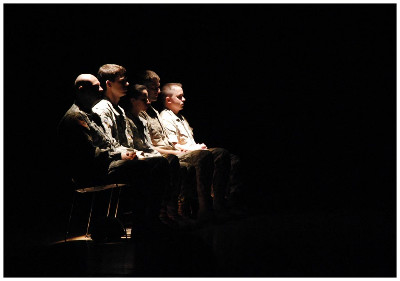 BOTTOM LINE:  A well intended production that tries hard but never quite delivers.

Brought to FringeNYC from the University of Kentucky, the documentary play civilian is full of heart. The topic itself is interesting and something largely untouched. It documents the experiences of veterans of the wars in Iraq and Afghanistan who eventually transitioned from military service into the life of students on a college campus. The play looks at several different service men in women with a wide range of experiences and from a few different branches of service. Some of the characters never discharged their weapon in combat, others saw significant amounts of violence and suffered both physical and mental consequences of it. Despite the differences in each individual account, civilian is at its core an ensemble piece. The impression given is an overview of what life is like for the hypothetical soldiers instead of humanizing individual soldiers.

The playwright, cast and director of civilian are all extremely earnest. In fact, they may be too earnest for their own good. What could be a gritty, eye opening, polarizing piece is rendered rather benign by cautious directing choices, self-conscious acting and writing somewhat void of structure. While all of the sentiments are there, the artistic objective seems undefined and is therefore lost on the audience.

Despite its shortcomings, there’s something inspiring about the production of civilian. The cast and production team are clearly dedicated to the project and hardworking, which in itself is nice to see in what can sometimes be a largely jaded theater community.