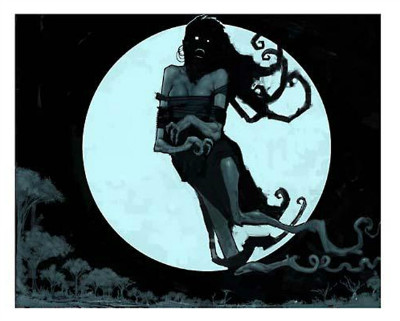 BOTTOM LINE: This is a play that can be appreciated on many levels: as the story of an Irish-American mother reluctant to let go of her grown son; as a man’s psychological odyssey to regain his sanity; and as a spooky, supernatural thriller.

Set in Chelsea, New York in 1981, Banshee, by Brian C. Petti, is a well-written and well-performed play that explores the relationships among Kit Sullivan, an overbearing Irish-American mother (Elisabeth Henry); her vulnerable 40-year-old son Jerry (Brian Christopher); Jerry’s devoted brother Neil (Ron Morehead); and the new woman in Jerry’s life, Cara (Lauren Murphy). Oh, and we can’t forget the title character, the banshee, a feminine spirit in Irish folklore often perceived as being an omen of death.

The play begins with Jerry having recently returned home from the mental institution in which he had been residing while recovering from a nervous breakdown. His prognosis is relatively good: his doctors are sufficiently confident that he will be able to make it in the real world; he is effectively medicated; and he can look forward to the support of his brother Neil, a cop who has found him a job and is eager to introduce him to Cara, a lovely young single mother who works with Neil as a police dispatcher.  On the other hand, Jerry’s mental condition is still fragile and he will be returning to live with his widowed mother Kit, with whom he has lived ever since the death of his father years ago. And that won’t be easy: Kit is selfish and controlling and reluctant to let go of her boy in order to allow him to develop a life of his own. Indeed, she may have been one of the factors that contributed to his nervous breakdown in the first place.

All goes well at the outset. Jerry performs well at his job and he and Cara really hit it off, despite Kit’s overt attempts to sabotage their relationship. But then Kit has her ominous dream which she is quick to relate to Jerry. In it, her dead husband (Jerry’s father) returns to tell her just one thing: “Banshee!”  Kit interprets that to mean that Cara is a banshee and that it is Cara’s presence in Jerry’s life that bodes evil and possibly death.

This is a lot for Jerry to handle in his fragile mental state, even with the support of both Neil and Cara, and he suffers a relapse, voluntarily checking himself back into the mental institution. When he leaves the hospital for the second time, it is with a new found strength and with the intention of finally cutting the cord that has bound him to his mother. Not surprisingly, this does not sit well with Kit and there is, recall, still that banshee (whether real or imaginary) to contend with. The play builds to a dramatic and somewhat enigmatic climax, which I did not find fully satisfying, but let’s not quibble: for a minimalist Fringe production, Banshee is well worth seeing.