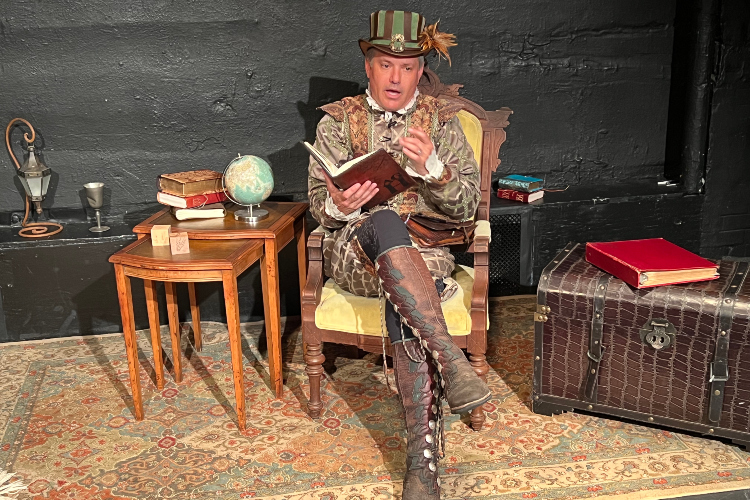 “Are you good natured?” Apparently, this was what 16th-century brothel owners asked potential customers, in order to weed out those who might shut them down. So it makes sense this is how Gordon Boudreau begins his night of poetic filth—in a sense, Boudreau creates for us a brothel of words: prepare to get verbally pleasured. (I promise—he will leave you satisfied.)

Boudreau performs as his alter-ego Arthur Greenleaf Holmes, a Shakespearean-era bard who somehow has access to the work of poets who lived several centuries later. Such anachronisms are par for the course, and even part of the fun—it’s all very much Renaissance Faire (a circuit where Holmes plies his vulgar trade) meets Monty Python meets Roald Dahl (his smutty, adult side) meets Margaret Cho.

On its face, it’s a simple set-up: Holmes recites his poetry, which is all very, very filthy. He’s an engaging, welcoming presence, and under David Rosenberg’s direction, Boudreau moves excitedly about the small space, making judicious use of the many props strewn about, at times offering up a choice gesture to underscore a line. And don’t let the titles deceive you: the ones that sound dirtiest (“Mother, Will My Stones Drop?” and “I Built My Love a Menstrual Hut”) are child’s play when set next to the demented depravity of “The Wedding Poem” and “A Hearthside Conversation.”

On a compositional level the poems are quite artful, making use of more bodily metaphors than you may have known existed, all the while paying careful attention to meter, rhyme, punning wordplay, and imagery (oh, the imagery). But were this piece just a series of clever vulgarities strung together, the gimmick might get old fast. Boudreau wisely mixes things up a bit, alternating his own compositions with that of Keats and Yeats (and a few others), pairing them to show how these poetic masters inspired his own work. Along the way he points out specific literary devices (the pathetic fallacy, antiphonal voice, not to mention the power of rhyme), helping us better appreciate this work as more than just puerile potty humor.

Boudreau also checks in with his audience—“how are we doing? Everyone okay?”—and gives folks plenty of chances to leave if they need to. I’m of two minds about this. To some extent, I’m not sure these interruptions are necessary—presumably the audience is somewhat self-selecting—and so this all has the tinge of unnecessary trigger warning. But then again, maybe this kind of thing is necessary in 2022? (If you’re easily offended, it should be clear by now this isn’t the show for you—and especially not “The Hurdy Gurdy Man.”) If nothing else, each check-in works as a kind of palate cleanser, an aural break (sometimes occurring mid-poem) that helps to keep you present for the next delicious assault on your sense of decency.

If you’re still not sure if Holmes’s poems are for you, his website offers a few clips (warning—the poems work much better live). Ultimately though, Holmes’s night of nasty poetry should have broad appeal for a few reasons. It’s that perfect mix of the high and the low. It’s very, very funny. And maybe most important of all, it’s about the human experience of having a body. Holmes is an equal-opportunity offender (the “love” of his menstrual hut ode gets her own rejoinder later on in the evening). And this is because we all have bodies; while the human body is many things, “clean and polite” isn’t always one of them. Humans are messy creatures, in all sorts of ways. And The Wildly Inappropriate Poetry of Arthur Greenleaf Holmes works as well as it does largely because Holmes isn’t afraid to revel in the mess of the human condition.

(The Wildly Inappropriate Poetry of Arthur Greenleaf Holmes plays at The Tank, 312 West 36th Street, through February 9, 2023. The running time is approximately 75 minutes. Performances are Wed and Thu at 9:30. No performances 11/23-24 or 12/21-29. Masks and proof of vaccine are required. Tickets are $25, and are available at thetanknyc.org. For more information visit arthurgreenleafholmes.com.)

The Wildly Inappropriate Poetry of Arthur Greenleaf Holmes is created, written, and performed by Gordon Boudreau. Directed and Produced by David Rosenberg.