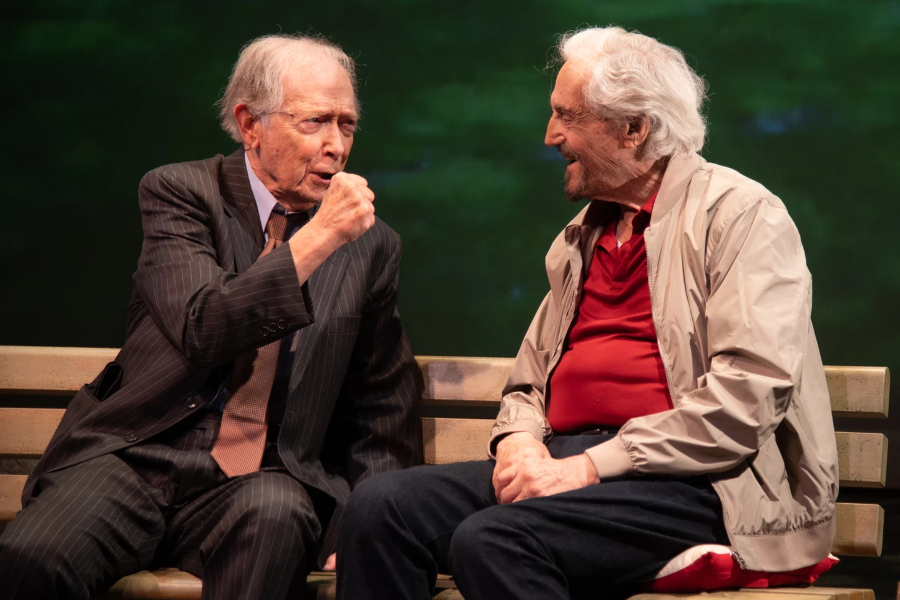 Packing in a combined 200+ years of Jewish comedy between the actors (Tony and Emmy winner Linden is 91; the beloved Kopell is 89) and writer (80-something Ed. Weinberger is an Emmy and Peabody Award winner), Two Jews, Talking features two one-act plays. The first is set in Biblical Times; the latter, on present-day _____ (this is the kind of show where just the setting gets a laugh). In both, the characters ruminate on, among other things, food, footwear, women, sex, and God, more or less in order of importance.

The first scene opens with Lou (Linden) and Bud (Kopell) some decades into their wandering in the desert with Moses. Bud says it’s been 30 years: “I’m an accountant. I keep track of these things.” According to Lou, they are “L-O-S-T,” which he, for some reason, spells out at least three more times. “Not once,” he adds, “has Moses asked for directions!” But his frustration is attributable to his fakakta feet and the boots he has to wear because the sandal guy doesn't have his size. But at least Lou made it to a certain event at Mt. Sinai.

The second, more meaningful half (there is no intermission) is less Borscht Belt as two strangers, the divorced Phil (Kopell) and widower Marty (Linden), discuss their wives, children, anti-Semitism and the afterlife while sitting on a bench. There are, of course, also lines about urination frequency (“like a broken lawn sprinkler!”), Viagra, and health insurance. But the heart of the scene is spirituality, what we hold meaningful, and if there’s something beyond this mortal coil. I liked Phil’s idea that Heaven is a place where you can get the raspberry-filled rugelach of your childhood that you only had that one time from the bakery before it went out of business. Marty, on the other hand, is the skeptic. It’s a philosophical and religious debate, mixed in with themes of loss, mortality, and grief, which will likely resonate with many.

The humor, rooted in jokes you've likely heard many, many times before, is perhaps not for everyone. But the show's target audience, judging by the laughs I heard, will relish the chance to see these two stars of television up close. And for those who want a little cholent with their rugelach, the thoughtful second half has some moving moments (although I might have liked a little addendum—perhaps a scene in the afterlife). Whether you come for the laughs, for Kopell and Linden, or to give your Bubbe a nice night out, there will be something to delight the room.

The cast is Hal Linden and Bernie Kopell.