Space Nunz of the Rescue Mainframe

Devised & Created by the Ensemble of Hook & Eye
Written and Adapted by Elizabeth Wong; Directed by Chad Lindsey
Produced by Hook & Eye Theater 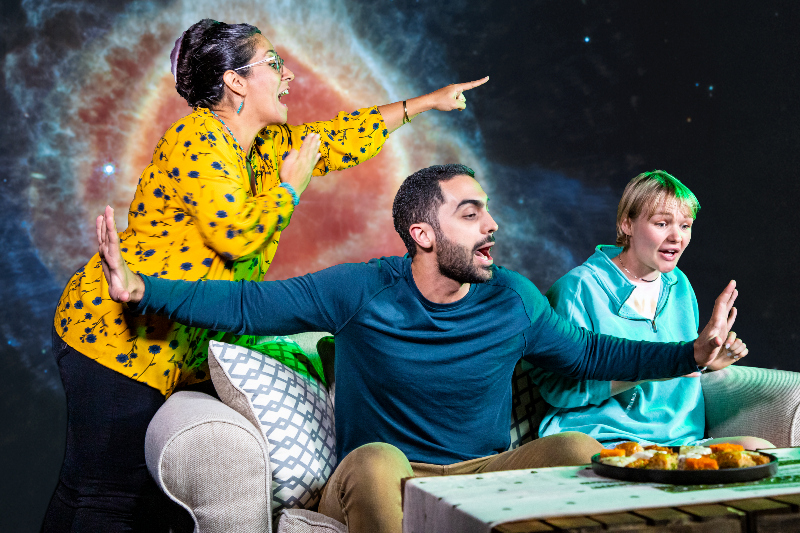 BOTTOM LINE: In the far future, a group of nuns on a spaceship sort through the remaining records of the 21st century.

Sometimes it makes sense to focus on the things regular humans can't control, such as revolutions, who we love, and the ways we unintentionally hurt them. Hook & Eye Theater’s new play is different. In this devised theater piece, the audience uses laser pointers to vote for the conclusion of each scene. The result is empowering and pleasantly unpredictable. It may even be worth your while to come back and see another performance so as to catch more of the possible plot lines.

Many centuries from now, human civilization is on the wane. As in other so-called “Dark Ages,” religious scholars preserve the most relevant cultural artifacts. In this story, Space Nunz Sister Iggy (Cynthia Babak) and Sister Olly (Elizabeth London), along with ship’s computer Daffodil (voiced by Nylda Mark), must carefully choose the patrimony they wish to preserve. Faced with limited storage, the Sisters have just deleted the Bible and the sonnets of Shakespeare, but they may keep a 21st-century romance called The Chloe Chronicles, which comes complete with 80s music.

Enter the great disruptor, the titular Chloe Canby (June Lienhart). On academic suspension from college in Hawaii, Chloe has returned to her wealthy family in New Hampshire. Her brother Cam (Jake Malavsky) runs a bar and grill that he would like to expand; unfortunately, his past business partners were random guys he hooked up with and who did more harm than good. Cam’s current partner is Nik Kazemi (Afsheen Misaghi), who served in the U.S. Army in Afghanistan. Nik, knowledgeable about medicine and the poetry of Byron, is a real keeper. The audience gets to laser point to the appropriate soundtrack choice: Beethoven’s Symphony No. 9 or Queen’s "Bohemian Rhapsody."

Intrigued by Nik, peace-loving Chloe goes with him to meet his mother, Leela Kazemi (Parnia “Nyx” Ayari), a classical dancer and refugee from the Islamic Revolution in Iran. As the Space Nunz watch on video, Leela quotes powerful Farsi poems and gives a stunning dance performance. However, as soon as Leela learns Chloe’s name and realizes who her mother is, she kicks her out of her house. As we see in a flashback, Chloe’s mother Sahara Canby (Carrie Heitman) has a history with Nik. What will happen when both families meet at the State Fair? Will the computer be able to hold the story together, and what can it teach us?

The set for Space Nunz of the Rescue Mainframe is mostly computer-generated. This magical creation of Lianne Arnold encompasses not only the computerized interior of the spaceship, but also old-timey photos of both Tehran and rural New Hampshire. And while Elizabeth Wong is credited as playwright, the piece is devised and created by the Hook & Eye ensemble. All of these story contributions, to say nothing of the choose-your-own-adventure-type rapid plot shifts (a 20th-century reference, for the younger readers) point to the versatility of the cast and to Chad Lindsey’s open-minded direction. Indeed, several folks (like Ayari, who also choreographs) are wearing multiple hats.

Also, as the play explores the Persian-American experience, Hook & Eye is partnering with Bijan, a local Persian restaurant, for a post-show gathering on November 9th in solidarity with the women and youth of Iran. There seems to be much more to explore here. Perhaps it's not just the poets who define the human experience—we can learn a lot from the college dropouts and bartenders, too.

(Space Nunz of the Rescue Mainframe plays at the Mark O’Donnell Theater, 160 Schermerhorn Street, Brooklyn, through November 13, 2022. The running time is 90 minutes with no intermission. Performances are Wednesdays through Saturdays at 7:30 and Sundays at 2; no performance Thursday 11/13, and additional performance Saturday 11/12 at 2. Tickets are $35 ($39.02 with online fees). For tickets and more information visit hookandeyetheater.com.)