Adapted from the play by Barry Conners; Directed by Jack Cummings III
Produced by Transport Group 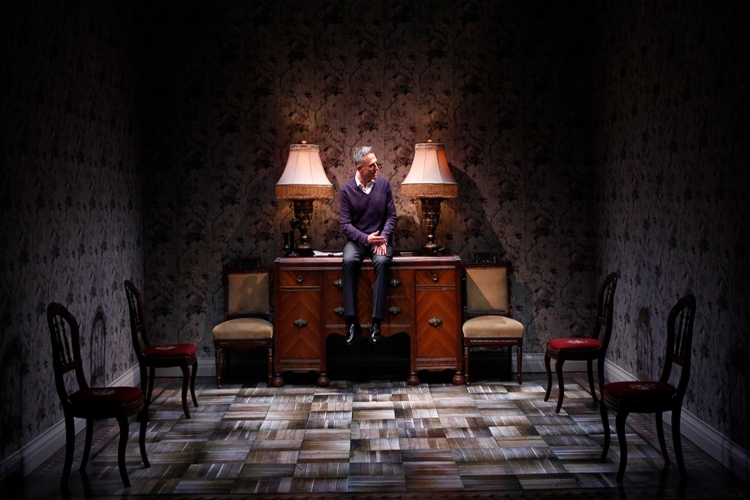 David Greenspan in The Patsy. Photo by Carol Rosegg.

BOTTOM LINE: On paper, Transport Group's The Patsy sounds like a stunt or a gimmick, but on stage it's gently subversive and superbly acted.

The set looks like a standard, if old-fashioned, American living room, with beige and brown furniture and pink-patterned wallpaper. David Greenspan, the sole performer onstage, also seems fairly standard: a white man, gray at the temples, dressed as if going to work at a “business casual” office. This is the very normal-looking setup for The Patsy, a three-act Broadway comedy from the 1920s turned into a solo show in which Greenspan plays all of the roles. It’s a simple concept, but it leads to a surprisingly complex experience.

Greenspan first performed The Patsy over a decade ago, directed by Jack Cummings III of Transport Group, in an adaptation of playwright Barry Conners’ original text (by Greenspan, Cummings and Krista Williams). This remount is Transport’s first show since the 2020 COVID shutdown, and it makes sense that the company would choose to revive a previously well-received, easily staged piece at this transitional moment, but despite its wholesome plot and unspectacular setting, The Patsy isn’t quite a “return to normalcy.” It centers on Patricia, a sweet, precocious 19-year-old who has grown up in the shadow of her vain older sister, Grace. Patricia is hopelessly in love with Grace’s former beau, Tony, who’s still smitten, despite Grace’s recent engagement to another man. We know, of course, that by the end of the play, Patricia will have won Tony’s love; the only question is how. But what once was a mainstream comedy poking fun at sibling rivalry and middle-class values is, in Cummings and Greenspan’s hands, a deconstruction of the American dream, gender roles, and theatre itself.

Just as a feat of virtuoso acting, The Patsy is impressive. Greenspan plays eight roles—female, male, young, old—and only occasionally, and briefly, is it unclear who’s speaking. With shifts of voice and posture and a few physical cues (Grace, for example, is forever flipping her hair), he navigates scenes involving as many as five characters. He plays some roles more broadly than others, as befits the plot, but resists going fully camp; when, as Patricia, he utters lines like, “You’re the sort of man a woman could just adore, Tony,” he cuts through their inherent hokeyness with an undeniable vein of sincerity.

Despite Greenspan’s masterly command of his craft, we never really forget who he is: a man playing both men and women, a sexagenarian playing young lovers as well as old marrieds. Luckily, we’re not really supposed to forget it; the experiment works because of the tension between Conners’ text and Greenspan's uncannily relaxed performance, accentuating its artifice and its latent pathos, which may seem clearer to audiences now than they did 97 years ago. (In modern parlance, Patricia’s relationship with her mother might be described as “toxic.”)

Over his lengthy and distinguished career as a writer and actor (he's won six OBIE Awards, among others), Greenspan has performed in plays both classic and contemporary. He’s tackled some fairly heavy and sophisticated material in other solo adaptations, such as Eugene O’Neill’s Strange Interlude and the works of Gertrude Stein. Yet in applying his special skill set to the lighter, lesser text of The Patsy, he hasn’t abandoned his commitment to theatrical and cultural inquiry—he’s just added a dollop of whipped cream to it.

(The Patsy plays at Abrons Arts Center, 466 Grand Street, through May 1, 2022. The running time is 80 minutes. Performances are Tuesdays though Fridays at 7; Saturdays at 3 and 7; and Sundays at 3. Tickets are $55 - $65 and are available at transportgroup.org.)

The cast is David Greenspan.