Based on The Cherry Orchard by Anton Chekhov; Directed by Igor Golyak
Produced by Arlekin Players Theatre and (zero-G) Lab 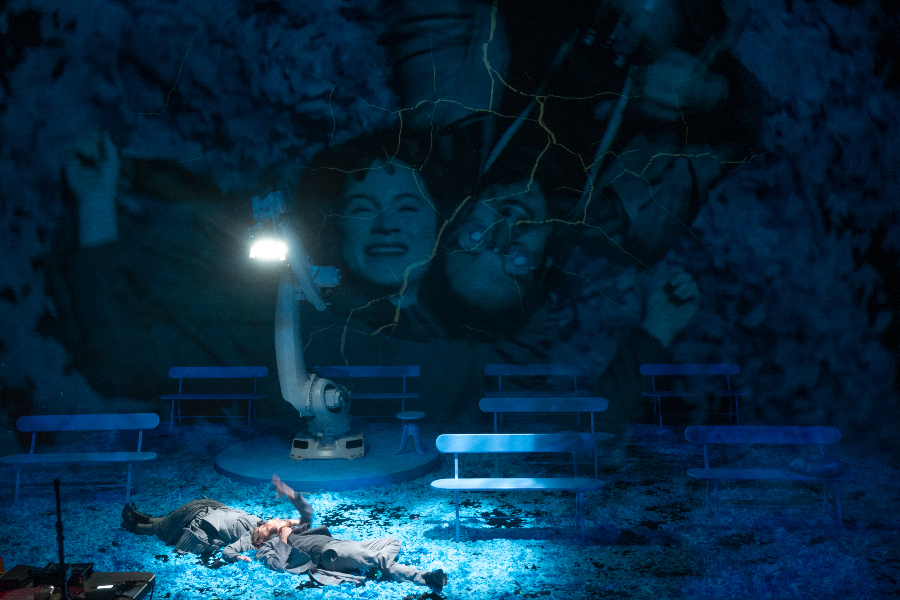 Juliet Brett and John McGinty in The Orchard. Photo by Pavel Antonov.

In The Orchard, produced by the Boston-based Arlekin Players at the Baryshnikov Art Center, one will still unmistakably recognize that original masterpiece of the early 20th century, The Cherry Orchard. Director Igor Golyak may have edited out a few minor characters and added and rearranged some text, but he has handled the source material with much respect and deep intuitive understanding. Aside from futuristic production design, robots, and a whole other virtual experience happening simultaneously, The Orchard makes Chekhov’s play strikingly relevant in light of the current war in Ukraine.

The Cherry Orchard, a play about the fallen Russian aristocracy, follows a single family returning back to their estate after five years of living abroad. The house and the title to their cherry orchard are being auctioned off to cover their debt. Delusional matriarch Lyubov Ranevskaya (Jessica Hecht), who is supported by her immature brother Leonid Gayev (Mark Nelson), refuses to turn the unprofitable property into a business enterprise as suggested by Yermolai Lopakhin (Nael Nacer). And it is Lopakhin, who himself comes from a long lineage of serfs working the estate, who ends up buying the orchard.

Across the various productions of The Cherry Orchard, Lopakhin is alternately portrayed as a hero (a representative of the new class of working entrepreneurs) or a villain (a greedy nouveau riche with no respect for tradition). But in Golyak’s version, Lopakhin is neither. He does not represent an opposition to the “old” world, but is deeply intertwined with it and would love to preserve these emotional ties through his love for Ranyevskaya.

The snowglobe-like world of the estate (production design by Anna Fedorova) is about to shatter. Yet the threat to Ranyevskaya’s family comes not from Lopakhin but from the “outside,” embodied in the (traditionally minuscule) role of the tramp, here called “passerby” (Ilya Volok). Dressed in military uniform, he appears for a short scene and everybody cowers from his blatant demands in Russian. "Intelligentsia!" he calls them dismissively, picking up a volume of Chekhov buried under the layer of blue petals that cover the stage. I instantly sensed that it is this nationalistic, militaristic force that is to be feared.

This makes The Orchard a painfully relevant reading of Chekhov. Yet this is not surprising, coming from a director of Ukrainian descent, in a production starring Soviet dissident Mikhail Baryshnikov as the servant Firs. Watching the performance of this legendary ballet dancer (known to some as the Russian lover of Carrie Bradshaw in Sex and the City) is a delightful experience in and of itself. One can tell that Baryshnikov, despite coloring his hair white, has way too much youthful energy to portray an ancient servant on the verge of death. Casting such a performer as the servant, and then extending his stage time, forces us to ponder the nature of servitude.

The other “servant” present on stage is a giant robotic “arm” called KUKA (robotics design is by Ton Sepe). Its functions, however, are not limited to serving coffee and sweeping. It also has a camera that follows the characters, the images of which are then projected onto the screen that spans the entire fourth wall, separating us from the actors. Unlike the other robotic creature (Charlotta’s dog), KUKA does not simply obey commands and perform tricks. On several occasions it grabs objects, thus preventing the characters (mainly Lopakhin) from possessing them. Is KUKA a spirit of the orchard, a symbolic trunk of the family tree, or an entirely separate character who has yet to claim their rights? The intrigue remains.

It's also worth mentioning that the preoccupation with technology goes beyond the walls of the theater, with a whole other interactive version of The Orchard that happens entirely online. The two Orchards briefly intersect when the at-home audience appear as the “current bidders” at the auction for the orchard, complete with those now ubiquitous Zoom windows.

(The Orchard plays at Baryshnikov Arts Center, 450 West 37th Street, through July 3, 2022. The running time is 2 hours with no intermission. Performances are Tuesdays through Thursdays at 7, Fridays at 8, Saturdays at 2 and 8, and Sundays at 2 and 7. Tickets are $39, $59, and $79. The show can also be experienced as a live stream for $29. Tickets to both live and streaming versions are available at TheOrchardOffBroadway.com.)