Book and Lyrics by Emily Kitchens; Music by Ben Quinn and Titus Tompkins
Directed by Hondo Weiss-Richmond
Presented by Hunger and Thirst Theatre

Off Off Broadway, Musical
Runs through 11.5.22
The New Ohio Theater, 154 Christopher Street 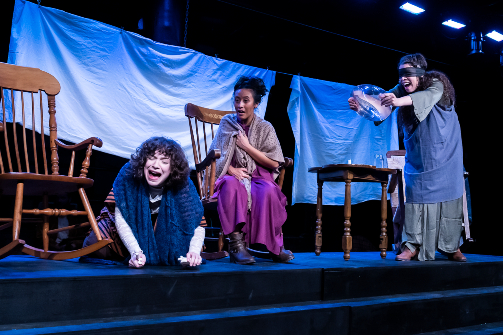 The last several years have brought humanity face to face with its own darkness—the pandemic and political turbulence have revealed the monstrosities we as a society have committed, generated, or condoned, as well as our capacity to vilify that which we cannot fully accept. Though these revelations have often bred new awareness or constructive action, we may find ourselves overwhelmed by the deeper responsibilities they entail, or frequently confronting old wounds when toxic cycles continue despite our efforts. As we seek the path forward, Hunger and Thirst Theatre’s bluegrass musical Monstress guides us to look to the past, using tales of antiquity’s most infamous female monsters as fresh sources of inspiration, wisdom, and empowerment.

Loosely styled as a rural stoop-side gathering, Monstress’s “cump’ny” draws us in for an evening of stories and songs inspired by the female monsters of Greek mythology, reinvigorating old narratives with folksy camaraderie and feminist insight. Punctuated by musical numbers, the show exists as a series of vignettes, each centered on a different epic villainess and her story. The show begins in blackout with an homage to the dark and vital feminine, as Nyx, the Titan goddess of night, finds her lover in the primordial void—and, from their union, creates humanity, gods, and monsters alike.

We move through the myth cycle to the tale of primal serpent goddess Echidna (Jianzi Colón-Soto). Infamous as the mother of countless fabled beasts, we learn that this status was imposed on Echidna by her brother Typhon (Titus Thompson), whose efforts to breed an army of creatures against the gods led to her imprisonment, sexual slavery, and repeated pregnancy. Reminiscent of the film O Brother, Where Art Thou, the Odysseus-inspired tale of “Catch” (Philip Estrera) and the Sirens (Allison Kelly, Rheanna Atendido, and Adam Boggs McDonald) casts hero and adversaries in the same sympathetic light, revealing both parties’ need for love, courage, and support.

Other sequences draw parallels with historical and recent events, highlighting human arrogance, imbalanced power structures, and self-fulfilling systems of oppression. Depicted as a trio of porch-sitting crones, the fate-weaving Graeae (Colón-Soto, Atendido, and Olivia Billings) face fear and regret as they divine 2005’s brewing hurricanes and stormy politics through the lens of their shared psychic eye. The tale of “Phix” and “Ed” tackles problematic victim-savior dynamics in its take on Oedipus and The Sphinx: self-mutilated and drug-addicted in her efforts to please patriarchal standards, Natalie Hegg’s Phix is both reviled and fetishized, simultaneously blamed for the conditions that bred her and tasked with the burden of fixing them. Unflinching in her critique of “heroes” like Ed, she rails against the hubris of pushing answers to the “riddles” of social ills without considering the questions they imply or the needs of the afflicted.

The tale of Medusa receives similar scrutiny, with its hero Perseus as Depression-era drifter “Perry” (Jordan Kaplan), journeying through Appalachia with the still-living severed head of monstress “Dusa” (Atendido) in tow. Perry’s abuse of his captive’s powers, ignorance of the painful past from which they stem, and denial of any part of her story that does not serve his agenda speaks volumes about the dehumanization of the marginalized, and the extractive ethos which perpetuates it.

While the show’s social commentary can sometimes run heavy-handed, and additional dramaturgical framework of the tales would benefit audience members less versed in Greek mythology (a small lobby display serves this function, but may be easily overlooked), Monstress speaks as much to our better parts as to our monsters, honoring our capacity to find hope amidst struggle and carry forward the wisdom of our past even as we reckon with its pain. As the show’s final number suggests, though the stories that shape us seem as fixed and ancient as the stars, we have the power to reclaim them, divine new meanings, and wear our “monstrosities” with pride.

(Monstress plays at the New Ohio Theater, 154 Christopher Street, through November 5, 2022. The running time is 100 minutes, no intermission. Performances are Thursdays at 7, Friday and Saturdays at 8, and Sundays at 3, with an additional performance on Wednesday 11/2 at 7. Masks and proof of vaccination required. Tickets are $20, or $10 with a donation of non-perishable items to Hunger & Thirst’s food drive, and are available at newohiotheatre.org. For more information about Hunger and Thirst Theatre, visit hungerandthirsttheatre.com.)