Melissa Etheridge: My Window—
A Journey Through Life 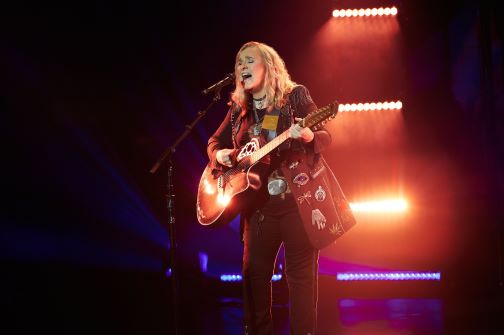 Melissa Etheridge in My Window—A Journey Through Life. Photo by Jenny Anderson.

BOTTOM LINE: A captivating (albeit lengthy) look at Melissa Etheridge's life and her struggle with grief following the death of her son.

During the spring of 2020, at the most stressful point of the pandemic, Melissa Etheridge suffered an unimaginable loss: losing her 21-year-old son Beckett to opioid addiction. The pain and grief that consumed Etheridge during what was already a trying time was made even worse by an email from her ex, who blamed her for their son’s death. In an attempt to find a way out of her darkness, Etheridge looked to her partner and future wife, Linda Wallem Etheridge, and to her growing interest in spirituality. Etheridge and Wallem created streaming content for their fans during the course of the pandemic, and later began work on what would become Etheridge’s Off Broadway solo show My Window—A Journey Through Life (Etheridge wanted a smaller theater in order to maintain intimacy with her fans), with the goal of spreading her message of finding joy even in the face of grief.

Even if you’re not familiar with Etheridge’s music, you’re probably familiar with the headlines that followed her throughout her life, from making waves by coming out in 1993 at Bill Clinton’s inauguration to then becoming half of America’s first celesbian couple with Julie Cypher, who caused a bit of a scandal by leaving her actor husband, Lou Diamond Phillips, for Etheridge. But despite her fame peaking in the ‘90s, Etheridge’s show doesn’t hone in on a specific era; it pans out to look at her life in its entirety, rather than the main attractions for which she is known.

As the title suggest, My Window—A Journey Through Life covers her life up until now, beginning with her birth in 1961, replete with projections of her baby photos. As a child, Etheridge becomes captivated by the music coming out of her family’s transistor radio, and expresses to her parents an urgent desire to learn the guitar. Her father is painted as a loving and supportive figure who encourages Etheridge to pursue her musical ambitions and chaperones teenage Etheridge to her gigs at bars throughout Kansas. When Etheridge later comes out to her father as an adult, he responds with loving acceptance.

Etheridge intersperses her storytelling with songs that connect to different times in her life, including the very first songs that she composed. These songs, along with Etheridge’s effervescent delivery, help make the show enthralling, even when the writing lags. While the show is dubbed a solo work, Etheridge is joined onstage by a roadie played by Kate Owens. While Owens does not have any lines, she contributes a lot of physical comedy, at one point humorously dancing alongside Etheridge as she portrays her devoted fan at a lesbian bar. And Olivia Sebesky's visually stunning projections compensate for the minimalist set. Projected photos and video clips also augment Etheridge’s narration well. The small theater space and sound design (by Colle Bustin) give focus to Etheridge’s smokey, soulful voice, one that sounds just as good now as it did thirty years ago.

While Etheridge hits all of her career highlights, she glosses over other aspects of her life. The homophobia she experienced early on the music industry—as an out lesbian playing in lesbian bars—is only briefly mentioned. While she covers her coming out at Clinton’s inauguration, she doesn't mention the backlash that followed. She also refrains from mentioning names—celebrity friends are only identified by their occupations, Julie Cypher is referred to only as the “ex-wife of the movie star,” and Etheridge's ex-wife Tammy Lynn Michaels is referred to as “the girl from Indiana.” Etheridge’s tumultuous relationships with both of her former partners get little discussion; she simply credits her interests in spirituality and philosophy as the reason for her split with Michaels. With her intended message of joy, one might assume that Etheridge wanted to minimize negativity. But focusing more on some of these messier parts of her life might lead to the kind of depth and emotion that doesn't really come until her discussion of her son’s death.

Much of the show’s focus is given to three long drug trips which Etheridge credits with changing her state of mind and opening her up to new ways of thinking. These involve mescaline as a college student, and marijuana and ayahuasca when she is an established musician. Etheridge calls these experiences her "paths to spirituality." crediting them with helping her climb out of the darkness of her grief towards the light. These trips are portrayed through psychedelic projections and flashing colored lights, while Etheridge performs appropriately trippy music. While these scenes are engaging both aesthetically and aurally, they feel unnecessarily lengthy. Given that the show clocks in at over three hours with an intermission, some judicious editing might help.

At the show’s end, Etheridge discusses finding joy after suffering from the pain of her grief and tells us that no one should not feel guilty for pursuing and feeling joy, as it doesn’t take anything away from anyone else. I certainly did feel joy singing along to “Come to My Window” in a theater filled with queer women, all of whom seemed to be delighted to be so close to the trailblazing hero who helped give many of them a more accepting world to come out in. My Window—A Journey Through Life might be an imperfect show, but it certainly proves Etheridge’s significance and relevance as both a gifted musician and as an important part of queer history.

(Melissa Etheridge: My Window—A Journey Through Life plays at New World Stages, 340 West 50th Street, through October 29, 2022. The running time is 3 hours with an intermission. Performances are Thursdays, Fridays, Saturdays, and Sundays at 8. There is also a performance Wed 10/26 at 8. Tickets are $80-$124 and are available at telecharge.com or by calling 212-239-6200. For more information visit melissaetheridge.com.)

The cast is Melissa Etheridge and Kate Owens.