This show is closed. For more information visit thetanknyc.org

Devised and Directed by Anna Kohler, based on the writings of Clarise Lespector

Off Off Broadway, Devised Theatre
Ran through 9.18
The Tank, 312 West 36th Street 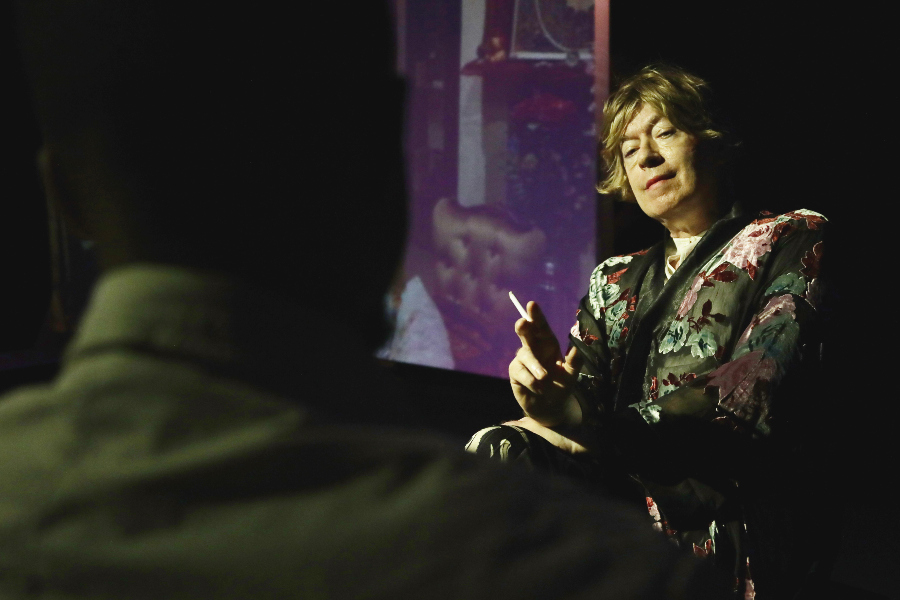 BOTTOM LINE: A piece with beautiful visuals, compelling performances, and poetic writing, despite being hard to follow.

Immense Joy is a devised work inspired by the writings of Brazilian author Clarise Lispector. Writer-director  Anna Kohler combines Lispector's writing with her own personal recollections to create a non-linear story of a woman struggling to be happy, led by a woman trying understand those writings and the role they play in her life. The result is a show that is incredibly beautiful with stunning visuals and poetic writings that carry you through the story in an almost dance-like way.

Massimiliano DiMartino's projection design is some of the best I’ve ever seen in a show on this scale. Two screens are periodically moved, and are almost always separate. Yet the images never look broken or stretched out across the two screens. I kept looking up for that second projector I swore must have been there (perhaps it was; I never found it). And aside from the precision required, the projections serve the story beautifully. Often we see something happen on screen and then continued live on stage, or we get an intense close-up of the writer's mouth—speaking their writing out loud or gently smoking—while a filter of older comic book pages, dots and all, is spread across.

The performances are all great—each actor carries us into and through the magical world they create in such a lovely way. From Anna Kohler, desperately trying to figure out how to tell these stories, to Natalia de Campos, who plays someone just trying to live a happy life, you feel each yearning for answers as obstacles continue to be thrown their way. John Hagan, who plays the writer, is incredibly engaging throughout, especially notable since he is mostly projected onto the two screens for the entire piece. Hagan handles the heightened language masterfully, and I found myself simultaneously rolling my eyes at the pretension of the things being said while also being swept away by the beauty of the words being written. Fabio Tavares is also a joy to watch. Tavares plays several roles throughout, but is incredibly captivating when dancing. His choreographed movement, like a series of push-ups where he launches himself into the air after each one, is truly an awe-inspiring physical spectacle. (No separate choreographer is credited, so he presumably devised this all with director Kohler.)

At times, the paths of each story, as well as who each character is, isn't clear. At several points I found myself asking—is this the story within the story? Is it a memory? Who is this particular girl versus that one? Yet when I stopped trying to puzzle out how it all fit together, I was able to sit back and enjoy the other aspects of the show; the writing, the visuals, and the acting are all so entrancing that it's a pleasure to just let them wash over you until the next moment that you’re able to jump back in.

Immense Joy is a beautiful collection of vignettes, with compelling characters and poetic dialogue. Perhaps it is even the case that the “immense joy” of Immense Joy really comes out of all of these characters just trying to figure it out. Though they all have different means of doing that, watching each go on their own journey is lovely to watch.

(Immense Joy played at the Tank, 312 West 36th Street, September 8-18, 2022. The running time was 80 minutes without an intermission. Performances were Thursdays to Saturdays at 7 and Sundays at 2. Tickets started at $15. For more information, visit thetanknyc.org.)