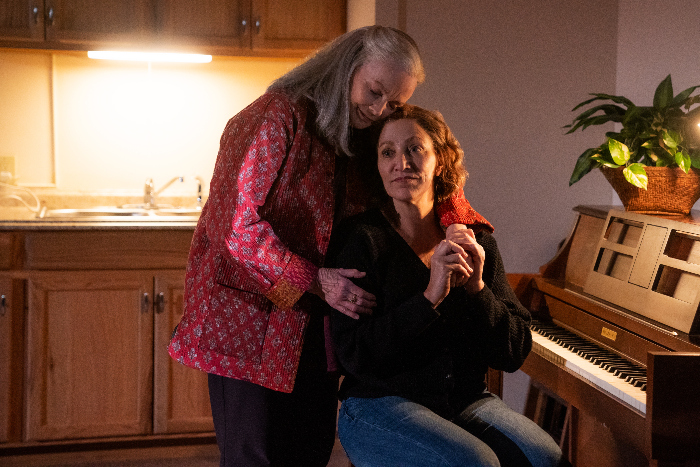 BOTTOM LINE: This stream-of-consciousness-style play begins as a trickle and slowly picks up speed to become a rushing wave of raw and deeply moving theatre.

When stream of consciousness is used in storytelling, it can often take some time to get used to. Most live performances don’t necessarily include such an audible and active narrative of thoughts and feelings. But in Simon Stephen’s Morning Sun, all three actors engage in this river of the seen and unseen. The central character is Charley, played by a masterful Edie Falco. Accompanying her are Blair Brown and Marin Ireland, both of whom deftly embody different people in Charley's life, effortlessly switching from parent to child, partner, or friend, and occasionally functioning as a Greek chorus of her inner psyche. Often finishing each other's sentences with interjections of what was thought or felt at the time, the trickle of their words begin to slowly flow into the river that is the story of Charley’s life.

As Charley is a born-and-bred New Yorker, much of the beginning functions as a love letter to the city, centering around Greenwich Village. Insider knowledge of local haunts abounds, including nods to the ghost at Cherry Lane and drinks at the White Horse Tavern, will be sure to delight New Yorkers. But while pleasant, the story of Charley’s childhood coupled with an unconventional theatre style can be challenging to adjust to. It is only when Charley moves into parenthood that Morning Sun begins to pick up steam.

Although the cast of famed theatre actors are all giving master classes in acting, there is nothing glamorous or sensational about the characters they portray. The people, usually female, are ordinary women living ordinary lives, working in mundane positions in unenviable jobs. But it is in these ordinary moments that Morning Sun consistently transcends the banal, at times becoming magnificent. The physical decline of an older family member, the scathing insults from a critical parent, the day a partner becomes violent, the feelings of inadequacy as a parent—all these intensely personal stories prove almost universally relatable; some audience members audibly gasped and wept with an empathy that felt palpable. The AIDS Crisis, September 11th, and the many other events that define New York City resonate deeply, bringing a much needed urgency that builds the play to a dramatic fever pitch. While Morning Sun begins with a slow and quiet ascent, its sunset is truly astonishing.

The cast is Blair Brown, Edie Falco, and Marin Ireland.