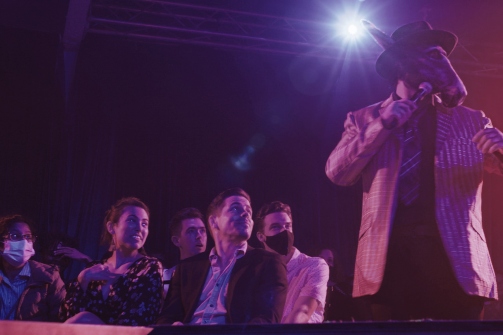 Mark Martin in Midsummer: A Shakespearience. Photo by Nick May.

One of Shakespeare’s most popular, and most produced, plays, A Midsummer Night’s Dream has given rise to countless modern adaptations. While the quality of such renditions can vary as widely as the liberties individual artists take with the text, the play’s enduring themes of love, folly, and magic have inspired some truly inventive works of theatre, and Midsummer: A Shakespearience is no exception. Placing audiences amidst a swanky enchanted forest, theatrical nightlife group Variety Life Productions re-imagines Shakespeare’s story as an invigorating evening of variety performance, interactive storytelling, and immersive ambience.

Curating our experience from its onset with a “woodland couture-inspired” dress code (no jeans or sneakers allowed), Variety Life’s team guides ticketholders upstairs into Casa 51, a private event space turned forest-inspired nightclub. In the pre-show, actors mingle with the audience around the venue’s central stage and flower-draped banquettes: Demetrius and other leads grill us for love advice; showgirl-costumed fairies serve drinks; members of the play’s craftsman performer troupe pose for selfies and coax us to sign up for the evening’s talent show. After a Gospel-style interlude by the Sing Harlem Choir, emcee/fairy king Oberon (DeWitt Fleming Jr.) calls the night to action, welcoming us to “Titania’s ‘Round Midnight Revue,” and declaring “it’s gonna be a love-fest in here tonight!”

True to this pronouncement, what follows is an exuberant night of variety acts, music, dance, and surprises, all inspired by Shakespeare’s tale of confounded love and magical chaos. Dressed in Zoot suits and 1940’s cocktail dresses, the play’s four lovers (Emma Rosa, Orlando Hernandez, Amira Murphy, and Izaiah Harris) enact scenes of wooing and rivalry as vigorous tap-dance battles, live serenades, and spoken word performance (Murphy’s rendition of Helena’s “How happy some o’er other” monologue is one of the most fiery and animated versions I’ve seen). Nimble contortionists, gregarious drag queens, and daring sword-eaters riff on love’s capacity to thrill, entangle, and threaten. Greg Dubin’s Puck entertains us with snarky comedy, sleight-of-hand, and needle-swallowing, while American Beatbox Champion Mark Martin crafts expert soundscapes as “beat-weaver” Bottom. Waking from her bower to re-assume the throne, Titania (Knoelle Higginson) commands the stage and court with sultry torch songs and lounge covers, set to live jazz helmed by Postmodern Jukebox’s Matt Parker.

Impressive lineup notwithstanding, it is Midsummer’s equal devotion to its ensemble, immersive elements, and foundational text that solidifies the piece’s impact. Each cast member’s unique talents lend themselves to the experience, and even the play's minor characters receive substantial, and distinctive, moments in the spotlight. This comes through most clearly in the mechanicals’ play-within-a-play finale, which features Vogue-dancing walls, paint tub-drumming lions, death-inspired interpretive dance, and a space-suited, human-disco-ball Moon. Likewise, Titania’s fairy attendants charm us with go-go dance sequences and striking aerial arts.

Though one need not have substantial Shakespeare knowledge to enjoy the show, Dream fans will appreciate subtle references to its source material (“double-cherry” inspired magic tricks; drinks named for enchanted flowers), and deft code-switching of Shakespearean text and contemporary dialogue. Similarly, the cast’s ongoing audience connection, even when not actively performing, keeps us steadily engaged: whether bantering with actors, joining interactive sequences, sharing hidden talents onstage, or simply observing, we feel as much a part of the play’s world as the performers themselves.

While Shakespearean adaptations, and immersive shows, can be divisive subjects within the theatre community or hard sells for those outside of it, Variety Life’s Midsummer rendition is as accessible as it is appealing. Though the show leans more into the original’s essence than its linear plot, its whimsy and insight capture the themes of Shakespeare’s work while bringing us together to celebrate love, talent, and the joys and struggles we share. As such, in both concept and execution, it’s a Shakesperience all can enjoy.

(Midsummer: A Shakespearience plays at Casa 51, 625 W 51st Street, through November 21, 2021. Performances are Wednesdays through Saturdays at 8. Proof of vaccination and masks required. The running time is 2 hours and 30 minutes with one intermission. Tickets are $75-$225. For more information, visit varietylifeproductions.com.)