The Unknown Dancer In The Neighborhood 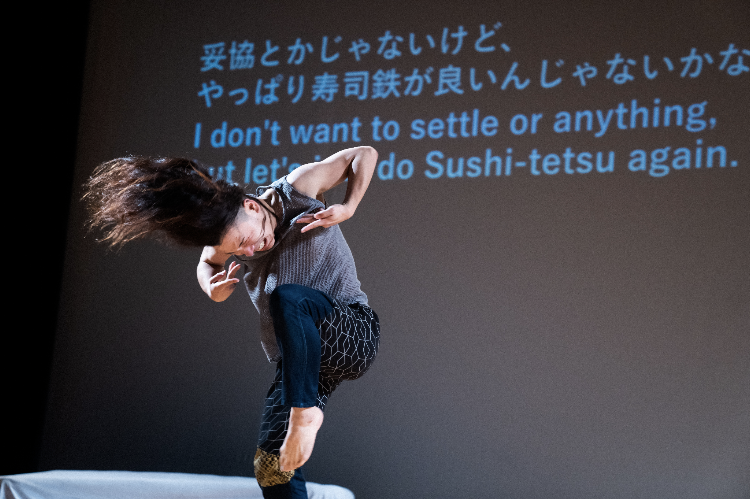 Wataru Kitao in The Unknown Dancer In The Neighborhood. Photo by Ayumi Sakamoto.

BOTTOM LINE: A creative new Japanese play and dance piece about the fractured nature of modern life in the city.

I loved Suguru Yamamoto's The Unknown Dancer In The Neighborhood, even while it disturbed me. In this new work, Wataru Kitao plays a dozen characters on what seems to be a quiet, normal day in the city of Nagai. Zipping between a young couple admiring a gorilla at the zoo, to the older gentleman who just wants the couple to get out of the way so he can take a photo but then trips and falls, to Ei, a young man who gets slapped by the older gentleman when he tries to help him stand up, the story is pleasantly busy with multiple voices and perspectives on the same events. One might call the mode of storytelling "post-modern," but that's just a Western label we eventually came up with. Some voices are spoken by Kitao (with English and Japanese supertitles) as he dances wildly around the stage. Other dialogue is represented by texts, tweets, silent rage and other passive-aggressive thoughts that Kitao brings out through dancing.

As the first batch of characters finishes their trip to the zoo, Ei observes that same older gentleman visiting a strip club. Looped music (sound by Junko Miyazaki) intensifies this scene, but as with the rest of the show, takes some of the focus off the more peripheral action. A dancer from that club is stabbed by a masked person, and no one notices. Overcrowding at train station leads to deaths of innocent passengers, yet no one claims responsibility. As in Bruegel's painting Landscape With The Fall Of Icarus, we may be so overstimulated that the supposed main event is unremarkable.

There are more bloody incidents in Nagai, including the death of thirty hostages in a shootout at the library. Since the terrorists were also killed, no one can explain why any of this happened. As dialogue between the young Megu (killed on the crowded train) and her mother is projected on the screen, the masked killer of the dancer appears onstage. The charisma and vitality of this "unknown dancer" builds to a crescendo in a long dance number, impossible not to look at. Tellingly, as this killer dances to a disco version of "La Mer"—a gentle song intentionally mismatched to what is happening onstage—he indicts all who are going about their business. Is this a critique of traditionally polite Japanese society? Are the folks who marvel at the noble gorilla in the zoo unable to admit the destructive tendencies of humans?

Playwright Suguru Yamamoto, also the director of this piece, has worked hard here to destabilize the hierarchy of theatrical meaning. Expertly delivered, rapid-fire supertitles like these will probably distract anyone. Japanese speakers in the audience will also be aware of the automatic, cliched dialogue that imprisons the characters, preventing them from seeing what is happening all around, while outside voices (Ei's dead mother, the subway train itself) have more poetic undertones. And Wataru Kitao's violent, gyrating dance moves are refreshing and just as complicated as the dense dialogue, while also joyfully freeing up the space he moves through.