The Truth Has Changed

Written and performed by Josh Fox; Directed by Fox and Ron Russell
Produced by International WOW Company
Part of the Public Theater's Under the Radar 2020 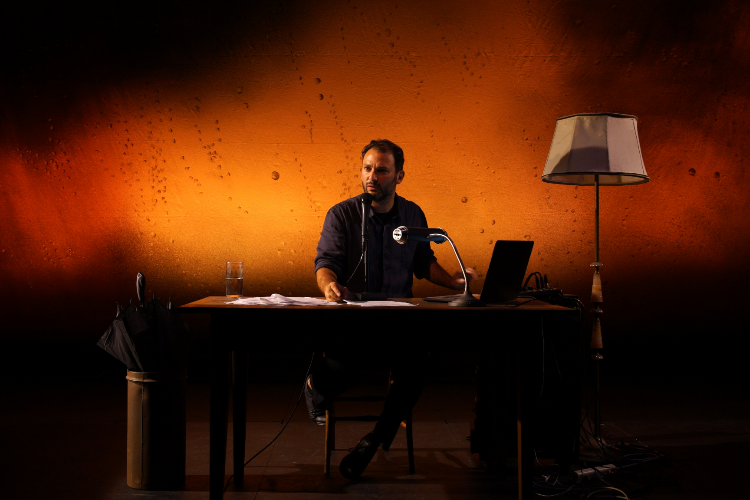 Josh Fox in The Truth Has Changed.

BOTTOM LINE: A solo performance for our time—and our future.

Audiences will know Josh Fox from his documentary Gasland. Other audiences may know Fox from the viral video of ordinary people lighting their water on fire in the wake of fracking. It’s also possible that audiences may know Fox to be that impossible combination—a liberal, fascist, Jewish, Nazi, Bernie-supporter from Hollywood. It all depends on where you live.

If the targeted, Cambridge Analytica-backed Steve Bannon has gotten to you in Pennsylvania, you might think the worst of Fox. But those New Yorkers sitting in the audience of the lauded Public Theater might just get the regular boring stuff about Fox returned to you on a Google search—a website, some social media, and a link to purchase Gasland (parts ones and two.)

More hauntingly, as Fox points out, you might get a similar result even if you just think a certain kind of way. If you’ve liked 300 things on Facebook, Mark Zuckerberg knows you more than you know yourself, and Bannon owns that data. Fox rightly points out that this has distorted reality. Truth has changed because our data has been specially curated just for us, accuracy be damned. The effect is oppressively apocalyptic, though if you’re a news junkie, that's not particularly news.

The poetry of Fox’s performance weaves together his story of helping first responders in 9/11, to some of the original Iran conspiracies in the 90s, to climate change, to his own work in documentary film, to right-wing governments taking over the globe, to his personal foibles with death threats on social media. All is reminiscent of Spalding Gray or, dare I mention, Mike Daisey. (Yes, certainly Daisey, especially when it comes to themes of truth.)

The Truth Has Changed is most successful when Fox beautifully writes of his reflections on 9/11 and a tour of the devastation of the Deepwater Horizon. But because Fox is heavy handed and long winded, his reflections on his work start to feel narcissistic, with a running time that clocks twenty minutes longer than advertised. It's a shame that such important work somehow manages to be more about the author than the many vital subjects it seeks to address.

The Truth Has Changed is written and performed by Josh Fox. Directed by Fox and Ron Russell. Music by Alex Ebert and Andy Gillis. Dramaturgy by Morgan Jenness. Lighting Design by Joseph Franjoine.