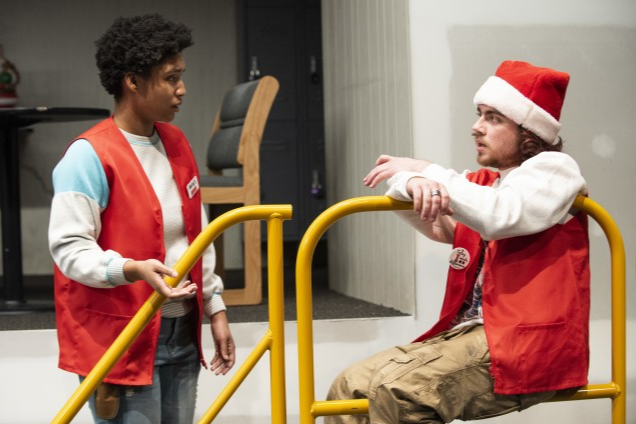 BOTTOM LINE: A thought-provoking look at working poor and black in rural America.

It’s late December 1995, and a young black woman named Emmie (played with quiet intensity by Jules Latimer) nervously interviews for a job at Berry’s, a megastore off the interstate in Paris, Vermont. The self-important supervisor, Gar (Eddie K. Robinson), pelts her with questions.

Emmie struggles to stay upbeat. A waitress at a nearby bar, she recently slipped on ice and badly bruised her face. She’s applied for work at nearly every employer in Paris, to no avail. When Gar hears Emmie was turned down by Price Chopper, they exchange a knowing glance. They’re both black and Price Chopper wouldn’t hire Gar either. Gar offers Emmie a job in the back room of Berry’s, which she gratefully accepts.

Initially, Emmie's colleagues are leery, and ask her where she’s from. “Here,” she answers, ignoring their thinly veiled racism. But when Emmie messes up early on, Wendy and Logan take her under their wing, banding together against the supercilious Gar. When the foreboding Carlisle (Bruce McKenzie) comes looking for Gar, Emmie learns that Gar is running an illegal side business through Berry’s stock room. Most troubling of all, Gar has fallen behind on delivery to Carlisle.

Falling behind is the defining struggle of every character in Paris. Playwright Eboni Booth has written distinct and equally fragile circumstances for each employee. By setting her play in Paris, Vermont, Booth winks at the vast disparity of wealth and opportunity between rural America and its sophisticated sister city in France. That’s a lot of ground to cover in a ninety-minute one-act play, set over a two-week pay period. While Paris builds to a point of high tension, it does not fully resolve for Emmie.

Director Knud Adams’ sharpest moments come via racially charged, wordless exchanges, like when Carlisle holds Emmie’s bruised face with both his hands and examines her mouth. But the dialogue-rich scenes about working for a large company—Gar’s callous corporate-speak and Maxine's indifference to an employee survey—convey a stronger point of view.

David Zinn’s two-tiered set masterfully reveals the corporate hierarchy. It’s implied that the Berry’s store is at street level, whereas the action of the play takes place below ground. Workers take their breaks in a windowless break room, and down a metal flight of stairs, Emmie tags inventory. Zinn’s set evokes a real-world Maslow’s Hierarchy of Needs, where the employees repeatedly trudge up and down the two lowest levels, but rarely rise above the basics. No wonder they slam the industrial doorways in and out of the stock room with such ferocity.

Other design elements are just as delightfully jarring: lighting designer Oona Curley snaps lights on and off, contrasting with the low-level melancholy of Fan Zhang’s Christmas song-tinged sound design and Trey Anastasio's original music. Costumes by Arnulfo Maldonado comically nod to the bright colors and puffy fabrics of the mid-nineties.

In Paris, the workers must punch in and punch out, an apt metaphor for the constant blows they throw and must absorb: caring for sick parents and troubled kids, hustling to make rent and minimum wage. As the newest hire, Emmie serves as audience surrogate to the boxing match that unfolds at Berry’s every day. She watches, bruised and wincing, but never joins the fight.