Off Broadway, Adaptation of a Classic
Runs through 3.8.20
BAM Harvey Theater, 651 Fulton Street 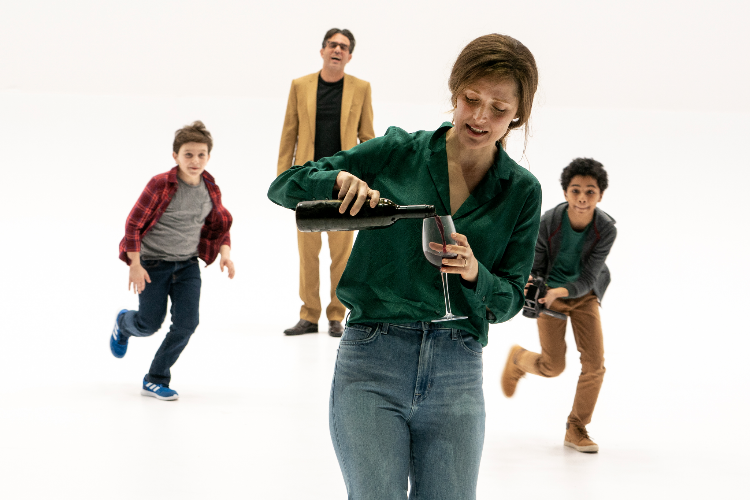 While I can’t say for sure why Simon Stone chose to keep Euripides’ title, even while changing all the character names (not to mention writing an entirely new play), it’s for sure a savvy decision. Aside from the name recognition, the title Medea alone carries with it an incredible sense of foreboding. (For those not up on their classic Greek tragedies, this is the one where she kills her kids). Every time I see it, knowing where it is going makes everything that much more compelling.

And sure, some will argue that in rewriting this tragedy to be about a disgraced medical research doctor named Anna (Rose Byrne), fresh out of a mental institution after poisoning her soon-to-be-ex husband Lucas (Bobby Cannavale), Stone foregoes the eternal power of the mythic in favor of more “relatable” psychological (or perhaps psychotic) realism. And…I guess? Maybe? Certainly, if you’re looking for a Medea that recaptures the shattering, grandiose past portrayals by Fiona Shaw or Diana Rigg, that’s not what you will get here.

Which is not to say Rose Byrne isn’t “as good” as those other women (with whom she will no doubt be compared, at least in certain circles)—Byrne gives an exceptionally nuanced, razor-focused performance of a woman trying to get back what she has lost. It’s just that such comparisons are pointless—this Medea is a completely different play. Much less a star vehicle than Euripides’ original, Stone’s Medea is more an ensemble piece; thankfully, to a one, each actor is excellent.

Along with Cannavale as the sexy philandering (but oh-so-conflicted) husband, there’s the wonderfully smarmy Dylan Baker as Christopher (i.e., King Creon in the original), who is both the owner of the pharma company that employs Lucas (and until recently, Anna). as well as the father of Lucas’s new girlfriend Clara (Madeline Weinstein, who manages to be simultaneously both sweet and devious). And compared to Euripides’s version (where the kids are mute), Stone’s child characters (here called Edgar and Gus, played by Gabriel Amoroso and Emeka Guindo the night I went)—are far more fleshed out, with a precocious love of The Sopranos that’s contraposed against a heart-breaking innocence about their own parents.

As good as this entire company is, in the end, your feelings about this Medea will really come down to how you feel about Stone’s concept. There are definitely parallels beyond Lucas-Jason and Christopher-Creon—like Medea, Anna has an expert knowledge of plant-based chemistry, knowledge that has been far more beneficial to her husband’s ascension than to her own career. But Stone isn’t too concerned with a slavish one-to-one adaptation (meaning, don’t expect a sun god’s chariot to swoop down to steal Anna away). He’s really more interested in mining this story to explore how it might continue to exert its power in a contemporary setting, even (or perhaps especially) when done quietly.

Stone does this by placing everyone on a stark white barren wasteland of a set (by Bob Cousins), so that it looks like the characters are almost floating. There's also Sarah Johnston's unforgiving and brutish white lighting, where even the audience doesn't get the comfort of darkness. But aside from a couple rolling chairs in one scene, and then a stunning addition (which I won’t spoil) midway through, Stone’s staging relies almost entirely on moving his actors around, sans furniture or props. Certainly Stone isn’t the first to mine such minimalism (I’m thinking especially of Ivo van Hove’s stunning, if controversial, Angels in America, which played this same theater back in October 2014). But such staging is difficult to do well—and to my mind, Stone exceeds tremendously. By cross-fading, or at times more fully overlapping, the scenes, Stone keeps the momentum moving; with the help of Stefan Gregory’s musical underscoring, it’s a relentless progression to a conclusion we all know is coming.

There’s also the live video work (by Julia Frey), all but de rigueur for BAM (I’m starting to wonder if there is a “live video minimum” at BAM, the way some Broadway musical houses have minimums for the size of their orchestras). But whereas some live video can feel tacked on, or even gimmicky, the video here is done with purpose. Even when it isn’t coming from the camera Edgar is using to film a documentary for school, the live video never feels superfluous; at its best, it yanks us into Anna’s orbit, forcing us to witness each subtle facial shift as her world starts to crumble.

If I have one complaint, it’s that Stone’s script suggests an Anna who is somewhat older than Lucas—ten to fifteen years at least; with Cannavale and Byrne, we essentially get the reverse. It’s not a deal-breaker, but while present-day Cannavale has a gravitas that helps ground Lucas, I did at times wish I could superimpose the mid-2000s Will and Grace version over this one, in order to highlight the extent to which Anna’s once-assistant has so painfully eclipsed her.

But these are minor casting quibbles, especially in a production that is so director-driven. As with many such shows where the director is the star, this Medea may be divisive. If you were one of those who (like me) regret missing Stone's Yerma at the Park Avenue Armory back in 2018, you no doubt already have your tickets to this. For those who can't stand Ivo van Hove or who shudder at the thought of another stripped-down classic, this probably won't change their minds. And for everyone else, if you’re open to a sparse, contemporary take with stunning visuals (that’s only 80 minutes long!), this Medea is worth the trip.