How to Load a Musket

By Talene Monahon; Directed by Jaki Bradley
Produced by Less Than Rent Theatre 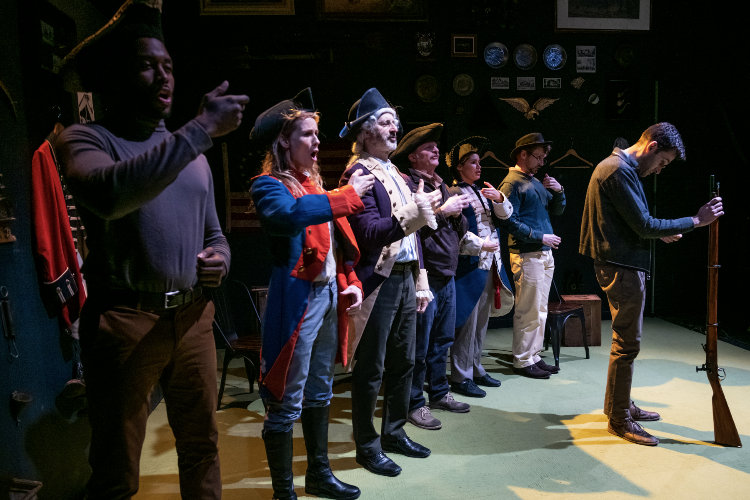 The company of How to Load a Musket. Photo by Russ Rowland.

BOTTOM LINE: Performing America through the eyes of Civil and Revolutionary War reenactors.

Late in How to Load a Musket, the playwright herself enters into her own creation to declare her unexpected obsession with the American war reenactors that make up the text of her verbatim theater piece we are still inside. She speaks to a black performance artist from Brooklyn (David J. Cork), who is also double cast as one of the few black reenactors—“Yeah, we exist” is his first line after we’ve met the predicted lineup of white performers. TM, playwright Talene Monahon’s character in the play, projects a palpable frustration with an art form that is purposely stuck in the past while illuminating more than they realize about our present.

Everything about Monahon’s play feels homespun. Next to Normal’s Adam Chanler-Berat is terminally charming as several characters: an older historian, a precocious, over-committed young reenactor (or “peacock” as we’re told these types are called), and a Martha Washington impersonator. But then, over the course of Monahon’s investigation, Charlottesville happens and the subjects of her documentary play stop talking.

This curious group seems exceedingly interested in the question of authenticity and “historical accuracy” in their work. When the question of race enters the picture, the black reenactor is encouraged to join one of the “colored regiments” or don some slave clothes and stand along the sidelines. Naturally, the Confederate flag waves and, due to a numbers issue, soldiers frequently have to be drafted to the Union side for the recreation to work. When the past rears its ugly head upon the removal of the Confederate statue sparking Charlottesville, the group must recon with an understanding that their performance is painfully real and their obsession with accuracy depends on the storyteller, here through the eyes of Monahon and Director Jaki Bradley who finds the balance to our present world with sensitivity.

The sentiment of How to Load a Musket is clear, the performances nuanced. Yet, as much of this type of devised theater, the process shines through in lieu of an altogether satisfying script. Perhaps this is the point, as we are forced to decide which storyteller to believe. “America was an idea,” Monahon writes. “It’s playacting.” She and her subjects could hardly have known when they were beginning work on this project just how much that would be true by the beginning of the Battle of 2020.

The cast is Carolyn Braver, Adam Chanler-Berat, David J. Cork, Ryan Spahn, Andy Taylor, Lucy Taylor, Richard Topol, and Nicole Villamil. (At the performance I saw the role ordinarily played by Carolyn Braver was played by playwright Talene Monahon on book. I am told this was a one-time arrangement due to a last-minute emergency.)