Off Off Broadway, Play
Runs through 1.19.20
Public Theatre, 425 Lafayette Street 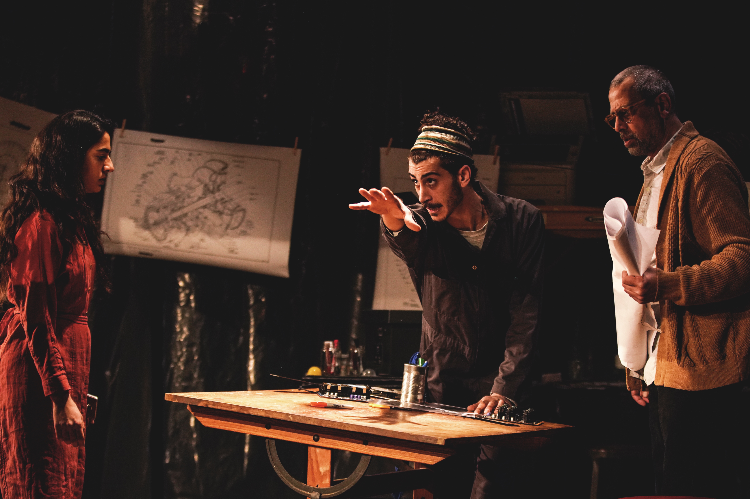 BOTTOM LINE: Among the destruction and gutters of the Middle Eastern conflict, some are still looking up at the stars.

The concept of a homemade rocket to the moon is certainly ambitious. But luckily the internationally renowned Palestinian playwright and director, Amir Nizar Zuabi, is up to the challenge. Yusuf, played by a dazzling Khalifa Natour, is a widower coping poorly with the death of his wife. After three years of anti-social behavior and strange noises from his shed, his concerned daughter Lila (Fidaa Zaidan) breaks into her father's man-cave only to discover the impossible and improbable: materials and blueprints for a homemade rocket. She is rightfully concerned about his mental state, especially considering that they are Palestinians who live in the West Bank, surrounded by Israeli soldiers who don’t take kindly to secret homemade devices meant to become airborne.

While the chaos is filled with necessary humor (there’s a wonderful bit about the importance of discerning between building a rocket and multiple rockets), it’s the setting of the play that makes it transcend Yusuf’s dream from the terrestrial to the celestial. It’s not just age, experience, and skepticism that works against Yusuf—the very land he stands on keeps him down instead of lifting him up. The daily lives of his fellow Palestinians are fraught with self-described humiliation and victimization. Many have clipped the wings of their own dreams and aspire to lead uninspiring lives, ones that leave them grounded and safe from turmoil. Yusuf reminds his family and the local sheik about the history of Muslims and astronomy, and that even the Quran states that they are a people affected by magic who look up to the beauty of stars.

Alongside the story of Yusuf is a subplot that involves a love triangle among his daughter, her fiancé Jawad (Alaa Shehada), and his apprentice Fadel (Ivan Kevork Azazian). While these scenes are innocuous, they feel unnecessary to the production. The rising action of Yusuf’s dream (not to mention Natour's show-stealing performance) is engaging enough without extra storylines, including a powerful scene in which Lila brings a searing indictment against idealistic men and the women and girls they leave behind. But although the backdrop of Grey Rock is specific to Palestinians, the themes of grief, love and transcendence to the great beyond are sure to resound universally.