The Confession of Lily Dare 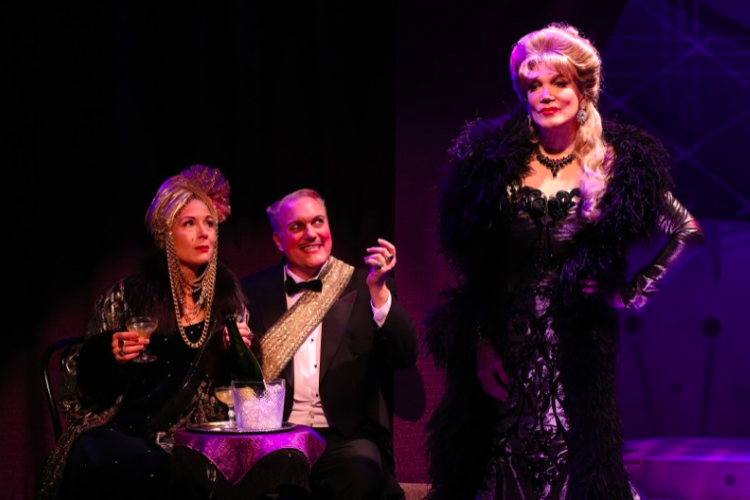 BOTTOM LINE: One of the best to ever do it, Charles Busch can't stop, won't stop putting on dresses and lovingly sending up the cinematic insanities of yesteryear.

First, my own confession: As a fan of old movies and classic queer comedy, I was primed to enjoy The Confession of Lily Dare going in. That said, the latest laugh riot by Charles Busch has so much going for it—delicious dialogue, a pitch-perfect supporting cast, a parade of opulent costumes, and Busch himself—that anyone who leaves not having had a good time is possibly just allergic to fun.

Busch has spent decades writing, and usually starring in, comedies that both celebrate and skewer classic movie tropes. From his early success with Vampire Lesbians of Sodom (a hit in a pre-gentrification Lower East Side) to his Tony-nominated Broadway outing The Tale of the Allergist's Wife, Busch always puts women center stage and lets them be emotionally messy and morally ambiguous (as well as insanely glamorous). He generally puts himself center stage as well, playing the lead role. In Lily Dare, Busch portrays the long-suffering heroine through many decades and never-ending reversals of fortune.

Even if you're not an expert on 1930s weepies, you'll recognize the archetypes that Busch as Lily embodies: first an innocent, love-starved orphan; then an unwed mother; next, a rising cabaret singer…you get the picture. Busch's comedic skills go beyond the easy laugh of "man in a dress"—he has a near-magical ability to commit completely to his characters while simultaneously lampooning them mercilessly. His characteristically snappy script mines all of the sources material's inherent silliness, then spices things up by turning its sexual undertones into overtones, complete with off-color language and blunt vulgarity.

There are no slouches among Busch's supporting players, but especially delightful are Nancy Anderson as the cheerful hooker who becomes Lily's lifelong friend and Howard McGillin as the highbrow gangster she trusts one too many times. But Busch, as always, is the heart of the show. Speaking of heart, you may feel a few legitimate twinges during The Confession of Lily Dare; after all, the genre it's based on—the self-sacrificing mother melodrama—was wildly popular for a reason. To his credit, Busch lets us have those poignant moments, but true to his craft, he makes sure to undercut them with the unsparing instinct for satire that's served him so well over the years. I confess: I'm here for it.

(The Confession of Lily Dare plays at the Cherry Lane Theatre, 38 Commerce Street, through March 5, 2020. The running time is 2 hours with an intermission. Performances are Tuesdays at 8; Wednesdays and Thursdays at 2 and 8; Fridays at 8; Saturdays at 2 and 8; and Sundays at 3, with an additional 2pm performance on Tuesday 3/5. Tickets are $82 - $152 and are available at primarystages.org or by calling 866-811-4111.)