Adapted by Leslie Noble, from a novel by Nancy Kricorian; Directed by Adam Coy
Produced by Egg & Spoon Theatre Collective 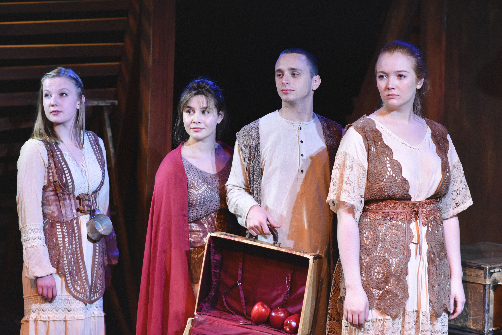 BOTTOM LINE: A poignant tale of the Armenian Genocide, told through the memories of a survivor.

The 1915 Armenian Genocide, the Turkish Ottoman Empire’s mass extermination and forced migration of over 1.5 million Armenians, stands as one of history’s most brutal examples of state-sponsored violence. Despite the international community’s delay in sufficiently acknowledging these events, the details of the Genocide live on in the memories of its survivors and their descendants throughout the Armenian diaspora. Based on Nancy Kricorian’s eponymous book, Egg & Spoon Theatre Company’s Zabelle personalizes these historic occurrences, leading us through the memories of an Armenian Genocide survivor and her tale of struggle, perseverance, and hope.

The piece’s action begins in 1985, as Zabelle (Sarineh Garapetian), an Armenian woman living in Massachusetts, approaches her 75th birthday. A series of flashbacks and recurring dreams prompt Zabelle to confront her past, recounting the loss of her family in the Armenian Genocide and the circumstances that brought her to America. As a young girl growing up in Hadjin, Armenia, Zabelle’s idyllic childhood is cut short when, by order of the Turkish government, her family and neighbors must leave their homes and trek through the perilous Syrian desert. As each of her family members succumbs to illness, starvation, and exposure, Zabelle must rely on her wits, and the help of her friend Arsinee, to survive.

Abducted by soldiers and taken to an orphanage in Istanbul, the girls are barred from speaking Armenian, given Turkish names, and, upon reaching adolescence, assigned as wives and servants to Turkish citizens. Employed as a cook for a wealthy Turkish family, a chance encounter leads to Zabelle’s reunion with her displaced community, adoption by a local Armenian woman, and the arranged marriage which would ultimately take her to a new life in America.

Despite the play’s intense subject matter, Egg & Spoon styles Zabelle as a modern folktale, infusing it with an innocence and wonder befitting the story’s young protagonist and the uncanny instances of grace and humanity she encounters. Opening the show with Armenian folk songs and a culturally specific preface, the show’s four-person ensemble (Garapetian, Julián Garnik, Catherine Giddings, and Lindsey Newton) jumps between multiple roles, portraying Zabelle at various ages as well as the allies and adversaries surrounding her.

Old suitcases and swaths of fabric serve several functions, easily becoming the costumes characters don, possessions they carry, and elements of the landscapes they navigate. Simple trappings underscore the show’s emotional life: Zabelle’s tin water cup becomes a symbol of hope and connection, while a progressively torn-apart family portrait speaks volumes about the effect of loss on a young girl’s life. A scrappy beauty pervades throughout, reflecting the human spirit’s capacity to survive and create in even the most inhospitable circumstances.

Amidst increasing public accounts of the migrant experience, as well as government attempts to stifle, marginalize, and persecute specific ethnic groups, Zabelle poses a warning against familiar prejudices and a reminder of the humanity underlying each statistic. Yet it is also an appeal to the best in us, displaying the power of the individual story and the importance of preserving and transmitting it as an act of respect and a means of crafting new life out of tragedy. If, as Armenian folktales claim, each story begins with a divine invitation to the storyteller, the listener, and the eavesdropper, it is our responsibility as an audience to bear witness and pass along the tales we receive.

(Zabelle played at The Access Theater, 380 Broadway, November 14-17, 2019. The running time was 60 minutes, no intermission. Performances were Thursday at 7, Friday at 8, Saturday at 2 and 8, and Sunday at 6. Tickets were $20. For more information visit eggandspoontheatre.org.)