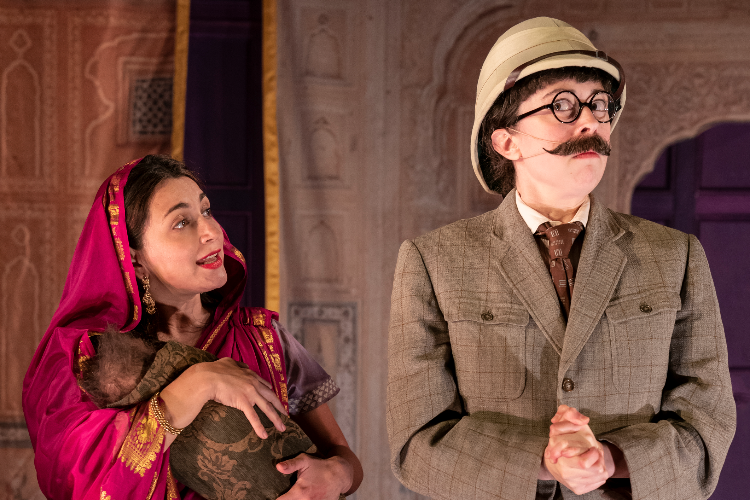 BOTTOM LINE:  A funny, anachronistic new play that comments on the absence of the female narrative in histories compiled by white men.

Feminism is a laugh-out-loud riot in Jaclyn Backhaus’ new play Wives, which offers four distinct vignettes about the experience of women in different time periods. You might remember Backhaus' zany sense of humor from her hilarious 2015 play Men on Boats, which featured an ensemble of non-male performers all playing male explorers on an expedition of the Colorado River in 1869. The play made fun of male machismo and masculine recklessness in irresistibly funny ways.

Backhaus returns with another anachronistic comedy, this time focusing on the untold narrative of the wives of prominent men throughout history. The first piece, set in the court of King Henri II of France, begins with what appears to be a sixteenth-century cooking show, as the King’s cook (Adina Verson) offers an earnest tutorial on how to prepare chicken. The ridiculousness of a cooking show in the sixteenth century sets the production’s tone perfectly and invites history buffs to take themselves a little less seriously. The plot follows the enmity between Queen Cathy (Purva Bedi) and Diane, the King’s mistress (Aadya Bedi), and their struggle to secure an inheritance after the King’s death. They resolve to subvert society’s expectations of how they should regard one another and join in a friendly alliance to secure their interests.

The second vignette imagines three of Ernest Hemingway’s ex-wives mourning the loss of the legendary writer. They drink heavily as they surmise how each will be remembered. Their melancholic realization: they won’t be remembered at all—or at least not in any meaningful way when compared with the footprint that Hemingway himself leaves.

The third chapter takes place in colonial India during the early 1900s. The British ambassador (Verson once again) decides that the witch Roop Rai (Purva Bedi) has exerted dangerous influence over the Maharaja (Sathya Sridharan), and he must take it upon himself to storm the Zenana (the house chambers reserved only for women) and liberate the Maharaja from Roop Rai’s clutches. However, the Maharani (Aadya Bedi) believes deeply in the healing that Roop Rai offers her husband and seeks to protect the witch from the ambassador.

In the fourth act, set at the present-day "Oxbridge University," a student (Aadya Bedi) wanders into a campus-sanctioned witch club that boasts only one other member (you guessed it, Verson again). The student is given the opportunity to conjure her ancestors and learn more about who she is. In the end her ancestors persuade her to believe that “everything about [her] is right.” The line is an over-used refrain in self-help books, but here, Backhaus manages to transforms it from cliché to meaningful piece of advice.

Under the direction of the very talented Margot Bordelon, the play’s relentless momentum speeds through all four parts in 80 short minutes. With the help of set designer Reid Thompson and lighting designer Amith Chandrashaker, Bordelon employs many devices of theatre magic to instantaneously transport us through time and space. Valérie Thérèse Bart’s fabulous costume design adds a burst of color to the production and establishes the cultural vocabulary of each of the worlds visited on our journey.

A great deal of the glory here goes to the excellent four-person ensemble, each of whom plays several roles across the four stories. Aadya Bedi and Purva Bedi are fierce as the often-embattled wives. (Backhaus’ script has them aggressively and unapologetically swearing like sailors to great comic effect.) Sathya Sridharan does his best Jimmy Stewart impersonation as the Maharaja, avoiding tired, stereotypical dialects and humanizing what could easily have been an exoticized character. And Adina Verson is hilarious in every role she inhabits. She transforms herself from head to toe with every character, keeping you on the edge of your seat wondering how she’ll present herself next. To the casting department of Saturday Night Live: if you don’t snatch up this incredibly gifted comedian, you will be forever defined by your oversight.

In many ways, the play is reminiscent of Caryl Churchill’s Top Girls, only Backhaus’ play is more accessible and entertaining, if more didactic and less ambitious. If you’re in the mood to see a feminist comment delivered with great energy and humor, then you can’t go wrong with this excellent production.