The Way We Get By 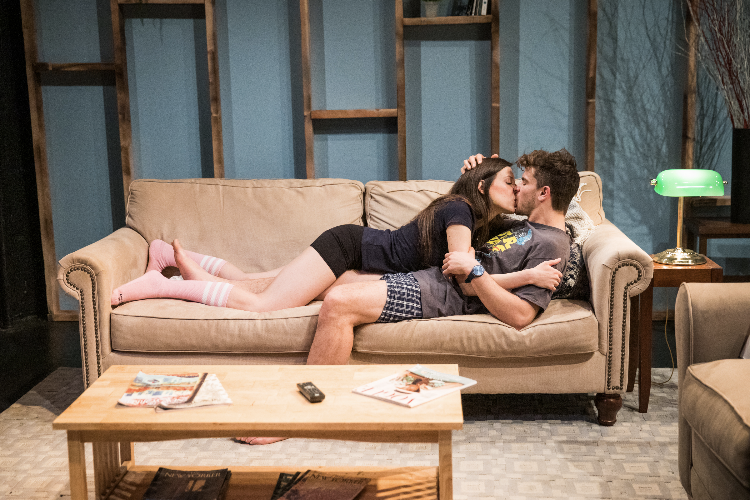 Francesca Ravera and André Vauthey in The Way We Get By. Photo by Bjorn Bolinder.

Neil LaBute's The Way We Get By opens in the aftermath of what appears to have been a drunken one-night stand. Doug (André Vauthey) paces an empty apartment in his boxers, peeking through personal belongings as though trying to figure out just who he went to bed with. But rather than fleeing the scene with pants in hand, Doug instead sits in an arm chair and pops open a book, as though waiting for last night's sexual conquest to wake up.

When Beth (Francesca Ravera) enters, it is not with the trepidation one might expect—she leaps upon him excitedly (an overt change in staging from the script's stage directions), conveying a certain familiarity. After some slightly awkward dialogue, Beth tries to persuade Doug to return to bed, something he balks at. But while Doug won't return to bed, he also won't leave. Through talk of exes and time in school together, it becomes clear that these two actually know each other quite well. Of course, this is a LaBute play, so there's a biting twist midway through.

Both Ravera and Vauthey bring a lot of energy to their roles, keeping up with a fast-paced script that often requires the characters to verbally spar. Director Kim T. Sharp nails the physical staging as the actors seamlessly leap across the stage fighting, jumping, and slipping in and out of sexual scenarios. One interesting aspect to this production is that both actors have strong European accents (Vauthey hails from Switzerland, Ravera from Italy). This adds an interesting dimension to a play that feels quite American on paper, but the strong accents sometimes make the quip-filled dialogue hard to follow.

Beyond the actors, John Salutz's sound design convincingly evokes a New York City setting and Duane Pagano's set design helps to add a polished, streamlined feel to this production. While some of the more timely jokes (like references to the American Apparel scandal) may have gathered a little dust since 2015, this production is still enjoyable. LaBute reliably finds a twisted take on the rom-com; by the end, The Way We Get By has raised questions about vulnerability, intimacy, and staving off the emotional baggage of one's past in order to find love.

The Way We Get By is by Neil LaBute. Directed by Kim T. Sharp. Set Design by Duane Pagano. Lighting and Sound Design by John Salutz. Stage Manager and Board Operator is Johanna Griesé.

The cast is Francesca Ravera and André Vauthey.