The Tallest Man in the World 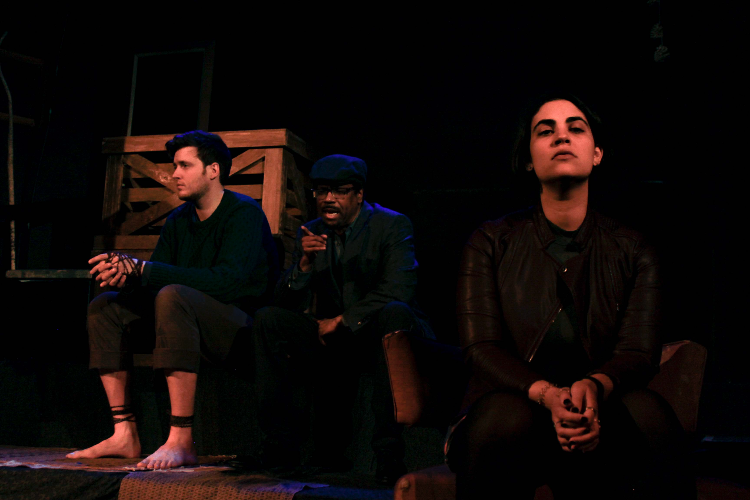 Finn Kilgore, Daniel Carlton, and Beatriz Miranda in The Tallest Man in The World. Photo by Ran Xia.

BOTTOM LINE: Told through three overlapping stories, The Tallest Man in the World weaves a haunting, poetic tale of love and loneliness.

Paradoxically, the search for love can be an isolating process, our efforts to connect just as easily triggering past hurts or highlighting the gaps between us. Irish dramatist Ailís Ní Ríain’s The Tallest Man in the World articulates this concept through the voices of three characters, each secluded but linked through fractured memories and frustrated longing.

The play begins as Felim (Daniel Carlton), a dying alcoholic, recalls the circumstances leading to his state of illness and regret. A promising academic married to his college sweetheart, Felim’s life fell apart when his wife Deirdre left him for one of her students. Left alone with their troubled young daughter Erin (Beatriz Miranda), Felim sought relief in alcohol and a series of dysfunctional love affairs. Segueing to the adult Erin’s discussions with a therapist, we see her following a similar path, seducing married men out of spite for her mother and compensation for the love her father could not give her. Next, the story jumps to an island off the Irish coast, where Eamonn (Finn Kilgore), an abnormally tall young man, lives as a local tourist attraction, kept in confinement and pining for a girl he met on the mainland years before. As fragmented accounts coalesce into joint narrative, we discover the characters’ shared past and the betrayal, rejection, and desire uniting them.

With her background as a composer, it comes as no surprise that Ní Ríain describes The Tallest Man in the World as “a trio for voices,” and its actors individually and jointly enhance her lyrical text. Miranda’s Erin is tempestuous but fragile, her brash sexuality barely masking a deeper need for love and acceptance. Carlton makes Felim’s desperation palpable as he struggles to connect hazy memories and make peace with his past. And as gentle giant Eamonn, Kilgore is poignant in his clear-eyed accounts of exploitation and hope for better days. As each actor recounts a memory, the remaining two function as a chorus, echoing the speaker’s thoughts and emerging as characters in each other’s stories. By placing the action on three sides of The Tank’s black box theatre, and employing impressionistic set pieces and quick, shadowy light changes, director Ran Xia and designers Sean Devare and Anthony Sertel Dean create a liminal memory-space, as malleable and all-encompassing as its characters’ troubled minds.

The play’s non-linear structure, evocative of memories themselves, leads us to piece together a through-line from constantly shifting accounts. Though Eamonn’s connection to the father-daughter pair is not apparent until much later, we see in his story the same themes of ostracism and disconnect running through theirs. In its focus on all manners of “bigness” and “smallness,” the play shows us how obsession can cloud our humanity, highlighting the distance between subject and object and rendering both parties larger or smaller than life. Yet it is these stylized trappings that make The Tallest Man in the World deeply relatable, speaking to the limits of human perception and our capacity to alienate others by pursuing love or recognition. Perhaps, it suggests, the things that isolate us may connect us more deeply than we can know.

(The Tallest Man in the World plays at The Tank, 312 West 36th Street, through March 17, 2019. The running time is 65 minutes with no intermission. Performances are Wednesdays through Saturdays at 7 and Sundays at 3. Tickets are $15, $25 reserved seating, and $12 students/seniors. To purchase tickets visit thetanknyc.org.)

The cast is Daniel Carlton, Beatriz Miranda, and Finn Kilgore.