By Jody Christopherson; Directed by Isaac Byrne
Part of the So-fi Festival 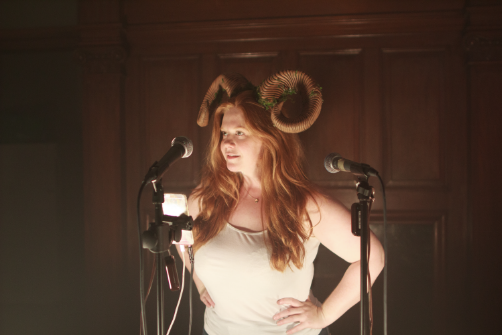 BOTTOM LINE: Jody Christopherson's ability to blend sounds and stories about the edge of Scotland is scarily good.

Jody Christopherson, Producing Artistic Director and Curator of the So-fi Festival, is back with her delightfully scary show St. Kilda. This is a piece for one woman, one recorded male voice, and many ingenious sound effects and live foley looping (designed by Andy Evan Cohen). The result is lots of echoes, noises, and breathing, which all repeats in a magical soundscape, to which is added a fog machine. The show may fit in a suitcase—its traveled around the U.S; at the same time, it is a big experience that builds to a scary crescendo.

Our narrator, clearly ready to leave her American hometown, prepares to travel to Europe. Her late grandmother, of Scottish origins, seems to have been her only tie to the community. St. Kilda has many references to solo traveling, such as an in-flight magazine that suggests that women should not voyage alone, and the narrator’s own “I have always depended on the kindness of assholes.”

Fascinated by the outlying islands of St. Kilda, whose only settlement, Hirta, was evacuated in the 1930s, she hires a Dutch boatman named Yfke (voiceover by Michael de Roos) to take her to that dangerous place. The story goes backwards and forwards in time, giving voice to several characters from Hirta. It's a sinister island, shaped like a woman, where guys once proved they were real men by climbing up a rock to catch and kill a seabird. Maybe the other recent female visitors drowned? Or maybe something worse happened to them? Wild rams aren't the only horned creatures lurking there.

With St. Kilda, Jody Christopherson covers a lot of ground in 55 minutes. Isaac Byrne's direction brings many voices into the mix: kind, curious, religious, stalkery, and bloodthirsty. This is definitely a story about female empowerment. Christopherson's fans may be familiar with her fondness for exploring haunted island landscapes. The fabulous sound design, with its echoing loops, is well suited to a world where the past is anything but dead.