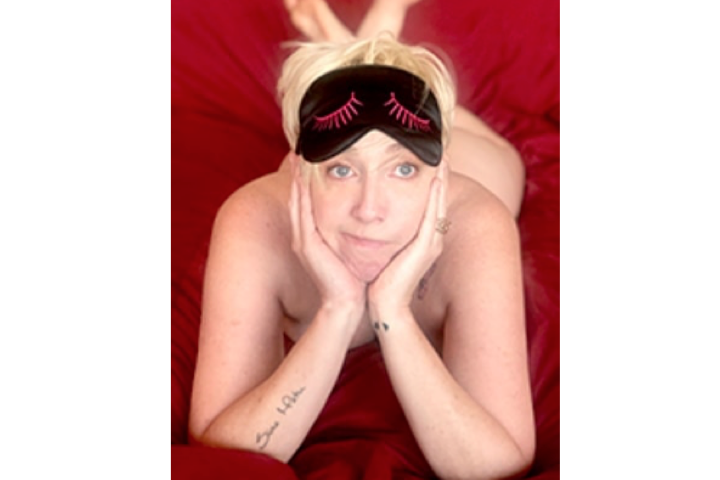 Playwright Killy Dwyer does not sleep. Ever. She tosses. She turns. She gets up and eats, goes to the bathroom, pops a handful of pills, then washes them down with a slug of Jim Beam. And still she remains awake, thinking about this-that-and-whatever and endlessly worrying.

Dwyer’s nightly restlessness and angst are magnified by the presence of her real-life husband, Craig Schober, who lies next to her on stage, in a comfy-looking double bed. He seems peaceful as he snores softly and rhythmically catches some z’s.

Needless to say, this frustrates Dwyer as she investigates every imaginable cure for insomnia, from sleep masks to Ambien, from videos and books on how to sleep to new pillows, aromatherapy, earplugs to block out sound, and machines to generate white noise. Nothing works.

But it does provide ample fodder for a play, and Sleep Depraved is a showcase for Dwyer’s considerable talent. Performing a host of original songs, she sings, tells stories, utilizes a puppet named Greta the Sleep Fairy, and reminisces about her long history as a non-sleeper. She also pulls audience members into the act, asking questions and, at one point, tucking a woman in the front row into her chair.

Videos—all of them created by Schober—serve as an interactive backdrop and highlight the horrors that keep us up at night. In addition, a mock Ted Talk opens the play and is a hilarious send-up of the claptrap that too often passes as science.

The result is entertaining and at times poignant. Nonetheless, the vignettes are disjointed, perhaps to mirror the ways our minds flit from one random thought to another when we’re in the throes of sleeplessness. Regardless, the themes Dwyer touches are likely to resonate widely. Indeed, if she is correct and 70 million Americans are currently sleep deprived, she has zeroed in on a true domestic crisis.

The cast is Killy Dwyer with Craig Schober.