By Dan Hasse; Directed by John Gould Rubin
Produced by The Private Theatre, in association with TÉA Creative 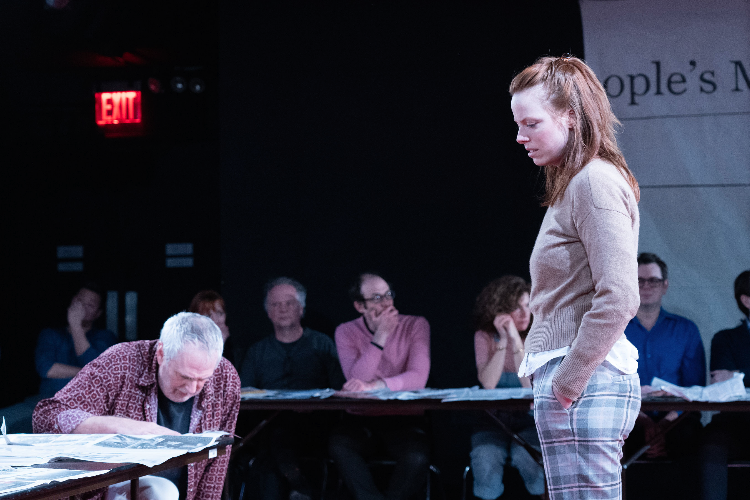 BOTTOM LINE: A tapestry of stories attempts to look deep into the modern American soul.

HERE's main theatre is stripped to the bones, and folding tables covered with crumbled pages of the New York Times are aligned along the perimeter. We are invited to take one of the numbered seats at the tables, facing inwards like at a college seminar. The actors of Rocco, Chelsea, Adriana, Sean, Claudia, Gianna, Alex are seated amongst us but, due to modern-day costumes (by Liz Toonkel), it’s not evident until they start their scene.

Newspapers rumble and fly up in the air filling the room with a thick smell of ink as introductory scenes follow each other in the first act. First we are at a Thanksgiving dinner where Sean (Adrian Baidoo) gives a passionate speech about his struggle to be thankful for the stigma of HIV. We meet shock-jock Rocco (Chuk Obasi), faced with the necessity of commenting on his on-air partner’s sexual assault allegations. Young professional Chelsea (Kaelyn Ambert-Gonzalez) stalks her romantic interest online. Gianna (Emily Jackson) relives the nightmare of losing her brother in 9/11 while working as a tour guide on the memorial to the tragedy. Claudia’s (Tayla Mar) play about the reunion of a mother and a daughter given up for adoption is in rehearsals when her own biological daughter enters her life. And Adriana (Adriana Rossetto), a young immigrant from Italy, chases her dreams of becoming both an actress in New York, and an American.

For the most part, the events take place in New York. While some stories are connected, the creators don’t try to tie everybody together with superficial plot twists. Rocco, Chelsea, Adriana… could be seven separate plays, but the piece is drawn together through the magnetic force of the tension that charges each of the characters. They are all faced with a choice, or they feel like they are obligated to justify the choices of their past, in order to earn self-respect and love.

Conceived by Vieve Radha Price and John Gould Rubin, Rocco, Chelsea, Adriana… was developed over a four-year period. Working with Bernard Lonergan's ideas of the “consciousness of conflict,” the group of interdisciplinary artists conducted a series of one-on-one conversations with people across the country in order to better understand the struggles of modern Americans. Or according to the program, “We set for ourselves the theatrical challenge of exploring the drama of polarizing mindsets.” The result is a multi-voiced tapestry of human experiences, woven together by Dan Hasse.

At times it is difficult to follow Rocco, Chelsea, Adriana… This monumental, elaborately composed play seems ever expending as it unfolds. Each of the cast of nine plays multiple roles, including supporting characters to the seven title ones. It takes a lot of mental energy to track and separate each narrative strand, and when I finally thought I figured it all out midway through the second act, the finale nearly made my brain overheat. In an extensive scene that provides resolution to all stories at once, the actors switch roles mid-sentence, conducting two dialogues at the same time across the room from each other. For a play aiming to connect to human experiences, Rocco, Chelsea, Adriana… requires a computer-like mental capacity from its audience.

Aside from being a cognitive challenge, Rocco, Chelsea, Adriana… moves audience members around, making them a part of the ever-shifting set. Chairs get stacked and reassembled. Tables get turned over, folded, and unfolded with a loud bang, which contributes to Drew Weinstein's dense sound design that is populated with ringtones and soothing female answering machine voices. A sign of the times, nearly each performer has a cell phone sticking out of the back pocket of their pants. Nearly every third scene is a phone conversation.

Keeping up with technology-heavy modern life, the show employs two projection screens (by Elizabeth Mak) but not very successfully. One scene—an audition for porn—happens entirely in a video, leaving those seated with their backs to the screen out of luck. In other instances the projections are mostly decorative, and often distracting. I connected more with a short pantomime scene performed by Adriana during the intermission, in which the petite Rossetto struggles to climb a tall stack of chairs and read an enormous newspaper while a voiceover reads a list of one hundred questions and answers to the test for becoming a U.S. citizen. It is a charming, surreal vignette of somebody’s life that is a refreshing break before descending into the swirling second act.

For some of act two, the audience is prompted to move freely and find whatever fascinates them. Amongst the now scattered tables and chairs, multiple dialogue unfold at the same time. I found myself drawn to the mother and son duo, who are quietly reconciling in the corner. The intimacy of this scene is so magical that I wish the creators further explored the difference in scale by breaking us up into smaller groups.

Rocco, Chelsea, Adriana… gets even more personal when audience members are called by name to take a seat near the end. A customs officer reads from the list, vividly evoking the nerve-racking situation of crossing a border when you are an alien. Destroying our anonymity miraculously accomplishes two goals. First, it makes us share Adriana’s anxiety, an empathy-making moment that is especially precious at a time that is so hostile to immigrants. Second, as if continuing the list of the show's title, it makes each and every person in the room a part of Rocco, Chelsea, Adriana, Sean, Claudia, Gianna, Alex...

(Rocco, Chelsea, Adriana, Sean, Claudia, Gianna, Alex plays at HERE Arts Center 145 Sixth Avenue, through March 9, 2019. The running time is 2 hours 30 minutes with an intermission. Performances are Tuesday through Saturday at 8:30; and Sundays at 4. There is also a matinee on Sat 3/9 at 4. Tickets are $30 and are available at here.org or by calling 212-352-3101. For more information visit teacreativeinc.com.)