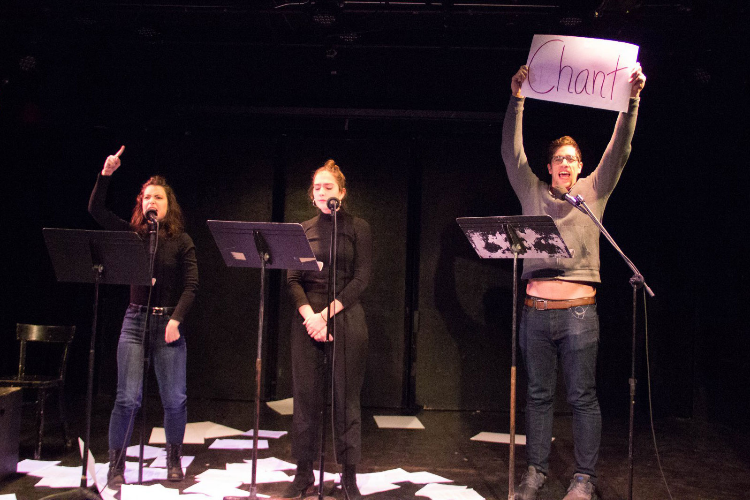 One of the many plays that make up the 2019 edition of Radio COTE. Photo by Ashley Marinaccio.

BOTTOM LINE: The 24-hour play challenge inspired by domestic news is back!

Radio COTE, produced by Co-Op Theatre East, is a perfect show for both WNYC junkies and people easily overwhelmed by the news. Each evening features a series of four short plays inspired by the news and conceived, written, and produced in the 24 hours before curtain. There is also an additional prompt that changes for each show (the night I went, each show had to have the sound of a hand knocking on wood). You may want to tune in to NPR or read up on your news site of choice the day before; if you don't, some parts might be confusing. But whatever your news habits, Radio COTE should still be enjoyable since the playwrights, directors, sound designers and actors all successfully gather their creativity and wit in such a short time.

New Dragon City by Edmond Malin is an endearing urban fairy tale inspired by the concussed hawk rescued by the police from a street in the Financial District. Only here, we have a dragon instead of a wild bird, along with a fairy living in a wooden bench, who is an expert on rare species. Director Emily Edwards gets creative with sound effects, engaging various objects—flutes, a singing bowl, wooden spoons, fans and shawls—to create a three-dimensional world. The costumes in this piece were also the most elaborate of the evening, which raised what in evenings like this can often be a reading-like setup.

Alexandra Cremer's The Social Studies Teacher is a more-or-less straightforward dialogue between a Newark public school principal and the social studies teacher who now has the responsibility to educate her students on LGBTQ studies and the contributions of people with disabilities. Laura Iris Hill and Dana Moss draw touching and funny portraits of two women struggling to bring compassion to their community.

In Sarah M. Chichester's Tiny Brain, Fox News host Tucker Carlson (Jack Sochet) is having a mental breakdown on the air during his interview with Rutger Bregman (Jennifer Cendana Armas). Twitching and nervously laughing, the conservative Carlson poorly handles the conversation with the leftist writer, while wrestling at the same time with the memory of his infamous 2004 interview with Jon Stewart (Khalid Rivera). Although the actors’ interpretation of the characters is spot on, this particular play might be difficult to follow without knowing the personas.

One More Day strikes the perfect balance between the immediate and the timeless. Through the absurdist dialogue between a Staten Island resident (Jane Diamond), a construction company representative (Aurea Tomeski), and a “Russian spy” (Monica Furman), we find out that New York City officials have decided to flood Staten Island because of global climate change. Playwright David L. Williams turns the news about building a sea wall in Staten Island upside down, satirizing about bureaucracy, enterprising businesses, Russian conspiracy, and people ignorant about news.

I was surprised by the quality of these four plays, given the fact that they were probably written overnight and rehearsed for only a few hours. The energy of the actors was contagious. Likely the case on most nights, the numerous cast members make up about half the audience, so the event feels warm and homey. Radio COTE is a delightful theatrical experience with wonderful performances and the lively rustle of pages flying down from music stands. In addition, all the live shows are recorded and are available as audio plays on Co-Op Theatre East's website.

The plays, playwrights, and actors are different for each performance.