By Elise Forier Edie; Directed by Amy E. Jones
Produced by Out of the Box Theatrics 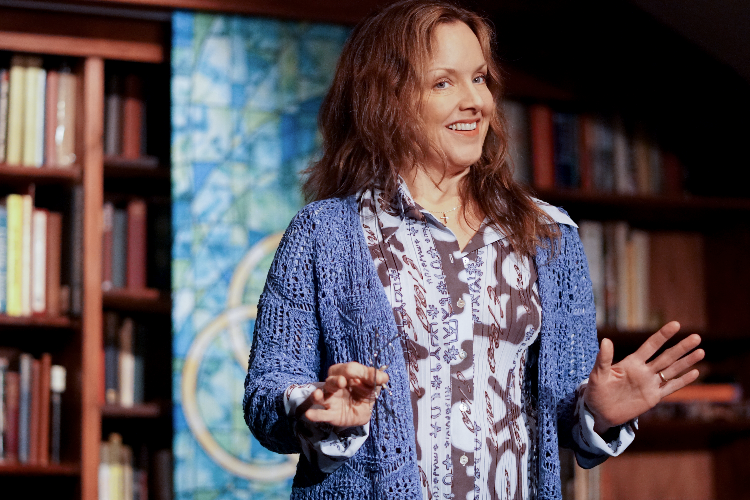 Alice Ripley in The Pink Unicorn. Photo by Jazelle Artistry.

BOTTOM LINE: A poignant drama, with ample humor, about one mother's struggle to accept her genderqueer child.

The summer before beginning high school, 14-year-old Jolene tells mom Trisha Lee (played with Tiger-mom intensity by Tony Award-winner Alice Ripley) that Jolene feels genderless, neither girl nor boy. Furthermore, the child asks Trisha Lee to take them—"she" and "her" are no longer the desired pronouns—shopping for a new wardrobe with "everything black": jeans, t-shirts, boots, even bras—and a leather jacket. A name change is also requested. Rather than Jolene, the rising ninth grader wants to simply be called Jo.

To say that this turns widowed mama Trisha’s world asunder is an understatement. Her fictional small hometown of Sparkton, Texas, had heretofore been a place of presumed homogeneity, with the only diversity coming from the choice between Baptist, Presbyterian, and Unitarian services on Sunday mornings. But Trisha loves her only child fiercely and unconditionally, so she races to the internet to research a slew of concepts that are new to her, from the word genderqueer, to the idea of polyamory, to the movement for LGBTQ equality. She’s a quick study.

Shortly thereafter, when Jo decides to organize a Gay Straight Alliance at Sparkton High and is rebuffed by school administrators, Trisha seeks the counsel of her minister, the perfectly named Pastor Dick. His overt homophobia sets off a spiral of activities, not the least of which is a public protest that opens closet doors for several community members.

It’s a heartwarming story with a relatively happy ending, but the tight, thoughtful script mixes humor and pathos to successfully touch upon our propensity to judge others and reflexively resist change before we really know what's at stake. Sub-themes both serious and not include alcoholism, religious hypocrisy, mourning the death of a beloved spouse, and living with a pet tarantula. All told, the mix keeps The Pink Unicorn moving in unanticipated directions. Performed on a modest stage, with a backdrop of filled-to-the-brim book shelves and just one chair, Alice Ripley is simultaneously radiant and real. Her struggle to accept her child without necessarily understanding her is beautifully rendered. It also feels honest. Trisha calls the teen “my little Jo of Arc.”  Suffice it to say that Sparkton, and the many real towns like it throughout the US, will forever benefit from their courageous and outspoken activism.

(The Pink Unicorn plays at The Episcopal Actor's Guild, 1 East 29th Street, through May 25, 2019. Running time is 95 minutes with no intermission. Performances are Wednesdays through Fridays at 7 (no performance Fri 5/17); Saturdays at 2 and 7. Tickets are $79; obstructed view seats are $39. $129 premium tickets (reserved seat and a complimentary beverage) are available. There is also a VIP package that includes tickets to other shows—see website for details. For tickets and more information visit ootbtheatrics.com.)