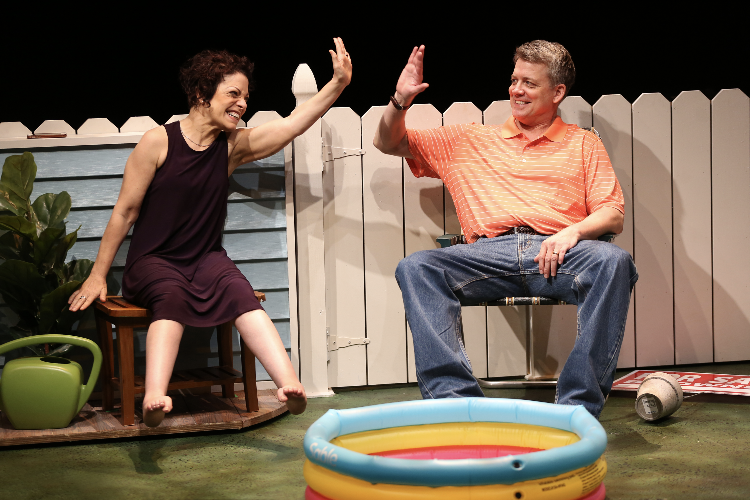 BOTTOM LINE: Public Servant—about a county commissioner and his conflicts with his daughter and a constituent—is entertaining, if perhaps not as developed as some of Brunstetter’s earlier works.

In Public Servant, Bekah Brunstetter returns to the familiar ground of her recent The Cake (which makes sense, since both are part of a trilogy)—both plays explore how those who lean to the right might learn to see issues from a new perspective. Whereas other artists might be quick to condemn such conservative characters, Brunstetter views them with empathy. She does this by showing them as initially jaded, even ignorant, but allowing them to fumble towards enlightenment (or at least a kind of understanding) over the course of the play. In both works, the catalysts for this potential enlightenment are daughters whose lefti-leaning ideologies clash with their parents’ conservative ideals.

Public Servant focuses on Ed (Chris Henry Coffey), a county commissioner in a small town somewhere in North Carolina. (Brunstetter's inspiration for both plays was discussions with her own North Carolinian parents; Ed is clearly based upon her father, who also served as a county commissioner.) Since taking office, Ed has towed the line and followed the familiarity of his safe routine. His morning ritual of listening to voicemails from his constituents is broken by a flurry of frantic calls from his estranged wife, who is bipolar and off her medication. But then he gets a visit from Miriam (Christine Bruno), a New Yorker who came back to sell her mother’s home, only to find that plans for a new beltway will render the home unsellable. Ed brusquely asserts that he can't help her, but Miriam's cerebral palsy only feeds the awkwardness and tension, as Ed has no idea how to accommodate her needs.

To further complicate matters, Ed’s 19-year-old daughter Hannah (Anna Lentz), who has been away attending her first year of college, returns unexpectedly. After briefly addressing her mother’s increasing psychological instability (a dramatic thread that isn't adequately developed), Hannah gets to the point: she needs money for some unpaid parking tickets. However, after Hannah and Miriam become fast friends, we learn the real reason Hannah needs the money—she needs an abortion, something she knows her conservative father would never support.

Public Servant marks the opening of Theater Breaking Through Barriers' 40th season. The company’s mission is to further the opportunities for professional artists with disabilities and to challenge widespread misconceptions and existing stereotypes. This mission is certainly accomplished in casting the talented Christine Bruno, a woman who, just like Miriam, suffers from cerebral palsy. The evident awkwardness and discomfort the characters display regarding Miriam’s CP, and their discussions with her about it, allow Public Servant to tackle misconceptions and stereotypes head-on without ever becoming too preachy or PC. This accomplishment is one of the strongest aspects of the production.

Another strength is the set, cleverly designed by Edward T. Morris, which features a white picket fence with segments that turn over to transform into different scenes. This allows for multiple scene changes without taking up too much time. Courtney E. Butt’s costume designs also serve to effectively reflect the characters’ mindsets and backgrounds.

Playwright Brunstetter is perhaps best known for her work on the hit drama This is Us, and clearly this show has had an influence on her writing. Whereas her earlier works like Miss Lilly Gets Boned and Be a Good Little Widow gave focus to the pain and emotional conflicts of their characters (all with a healthy dose of edgy humor), Public Servant, much like a TV drama, is quick to pivot towards a happy ending and a heart-warming message—as long as the characters band together, as a family and as friends, everything will turn out okay in the end. The relationship between Miriam and Hannah in particular seems too thinly sketched. Almost instantaneously, they become so close that Miriam takes Hannah to the abortion clinic.

Furthermore, Brunstetter’s script does not fully explore two potentially compelling sources of conflict: Miriam’s conflicted feelings about trying to get pregnant herself, and Hannah having to cope with a mentally ill mother who seems unable to be a parental figure. Allowing more time here might strengthen the script, as would providing more of a basis for Hannah and Miriam's friendship. Hannah’s resolution with her father also happens rather quickly; deepening this conflict might provide a stronger ending. Nevertheless, Public Servant is an entertaining production, with characters you can become emotionally invested in.