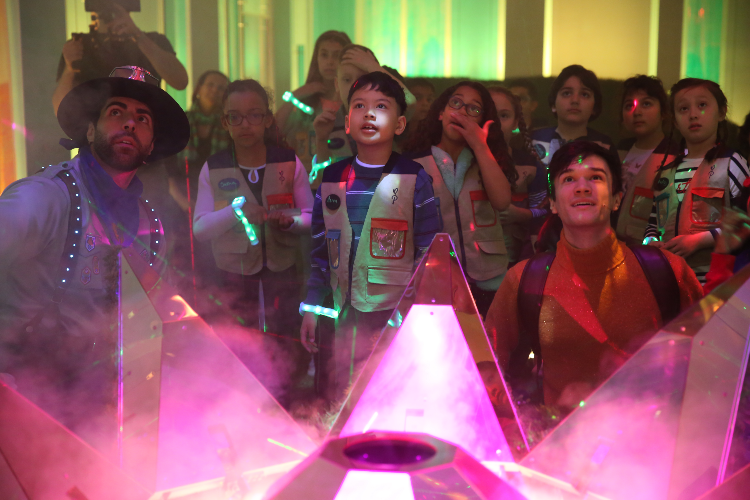 A scene from Pip's Island.

BOTTOM LINE: An immersive show that’s fun for kids and adults willing to let their inner child come out and play.

Every now and then, even the most faithful New Yorker dreams of being whisked off to a tropical paradise to escape the chaos of 42nd Street and the hectic pace of city living. But travel in this economy? You have to be kidding! Now imagine wanting to take your entire family on vacation. Out of the question! But in the middle of the theatre district lies an oasis where parents can take their children—and willing adult companions—on an adventure to an exotic land, one where colorful plants and creatures await to teach them about values that many have forgotten about, or need to learn.

In the immersive spectacle of Pip’s Island, recommended for children ages 4-10, visitors can take part in a quest for the “sparks” needed to defeat the villainous Joules Volter (Peter Michael Marino, at the performance I attended), a real estate mogul of sorts, who has taken over the island and seeks to impose his reign of darkness upon its inhabitants.

Fortunately, the little adventurers that you have brought along have all the skills necessary to set things right and return the island to its former peaceful state. Upon arrival, children are decked in adventurer gear (a very flattering khaki vest) and given their very own Legendariums, a shiny bracelet meant to collect the sparks that will restore joy. (They don’t get to keep either the vest or the bracelet, but the merch shop downstairs has similar paraphernalia at affordable prices—just make sure to bring cards, as cash is not accepted on this island.)

After being welcomed by the Expedition Leader (the hilarious Ryan Salvato), who also provides pithy training, audience members visit a series of rooms, each one containing a different puzzle that reveals a spark when solved (all the puzzles are easy, although they increase in complexity with each new room). If you’re thinking about Thanos’ jewels from The Avengers, you’re not too far off, although there are infinitely less casualties at Pip’s Island.

The rooms vary in form and design (the sets were created by Infinite Scenic, John Creech Design and Production, and Pink Sparrow) but they all contain fantastical elements that will make even the most cynical adventurer gasp with delight. Among the most impressive are a grassy sanctuary surrounded by digital waterfalls, an underwater boudoir decked with seashell decorations (the fish slippers are adorable and should be sold at the shop), and the bakery, which is home to an oversized puppet (by the Monkey Boys) looking for its next meal. The puppet might be scary for smaller children, but the actors do a great job in reassuring them that nothing bad can happen while they visit.

Although adults are relegated to the position of “assistant explorers,” they may note the diversity of the cast, one which includes actors of all skin colors, ages, and genders. The charming Pip is played by Clay Westman, a lanky young man whose warm, childlike smile makes him feel like the lovechild of Mister Rogers and Indiana Jones. Michaelle Vilsa, who plays the divalicious Shelly, infuses the show with much needed camp, and while some of the jokes might fly past children’s heads, there is nary a moment deemed too saucy. Even the villainous Joules is played by Marino as one of the Emerald City guards from The Wizard of Oz. He makes it clear that his villainy comes from bitterness and lack of affection, not necessarily from a dark heart.

After defeating Joules, the kids take part in a short celebration of hope, creativity, imagination and teamwork: tools they ought to remember as they make their way back home on the subway, and which adults might want to hold on to as they exit the island and encounter traffic, imprudent tourists, and the many elements that make a tropical getaway necessary every now and then.

(Pip’s Island plays at 400 West 42nd Street. The running time is 1 hour. Performances are Wednesdays through Fridays every half hour between 10:00 AM and 11:30 AM, and then hourly between 2:00 and 5:00; Saturdays and Sundays every half hour between 9:00 AM and 6:00 PM. Plan to arrive 15 minutes early. Tickets are $59; discounts are available for schools and groups. For tickets and more information, visit pipsisland.com.)