Paddington Gets in a Jam 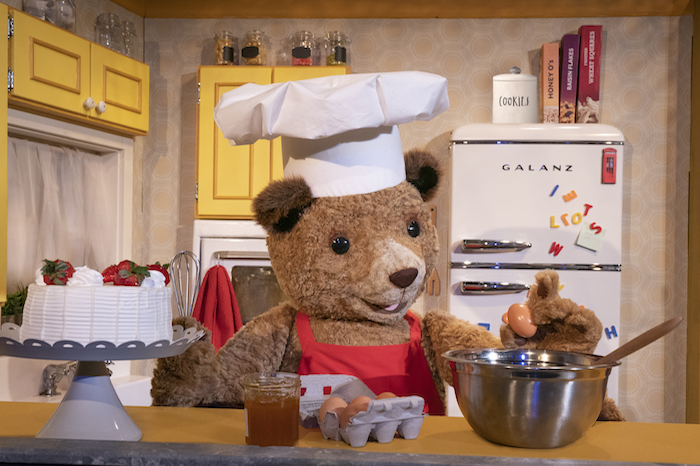 Paddington Bear as brought to life by Jake Bazel, John Cody, and Kirsty Moon in Paddington Gets in a Jam.
Photo by Richard Termine.

BOTTOM LINE: Paddington Gets in a Jam delights audiences of all ages with a brand new adventure for “The World’s Most Beloved Bear.”

Paddington runs short on ingredients while making his famous orange marmalade, and arrives on the doorstep of his neighbor, Mr. Curry (A.J. Ditty), asking for a cup of sugar. Mr. Curry is much too busy preparing for the arrival of his Great Aunt Matilda (Jessica Bulzacchelli) to look for sugar. Sensing the opportunity to lend a hand, Paddington volunteers his afternoon to help. In true Paddington fashion, he stumbles into jams and slapstick scenarios while trying to make Great Aunt Matilda’s visit nothing short of splendid.

Paddington is brought to life by a skillful trio of puppeteers: Jake Bazel (The Very Hungry Caterpillar Show), John Cody, and Kirsty Moon, bringing all of the warmth and clumsy optimism of Paddington front and center. From baking cakes to wallpapering gone wrong and vacuuming up the contents of Mr. Curry’s living room, Paddington scrambles from solution to solution with his signature enthusiasm.

Although primarily designed for theatre-goers ages 4-9, Paddington Gets in a Jam is sure to delight any child-at-heart. As a star of the page since 1958, charitable figure since 1976, and movie star since 2014, Paddington has fans of all ages. The set design by David Goldstein and Peter Feuchtwanger reads similar to a set from Sesame Street, adding to the immediate nostalgia presented by the hour-long play. This design features two stories of Mr. Curry’s house, including a kitchen, foyer, broom closet, patio, bedroom, and bathroom. Actors and puppeteers float from room to room, triggering assorted gimmicks that add to Paddington’s charm and make an emergency marmalade sandwich all the more necessary.

A real highlight for adult audiences may be how easy DR2 Theatre and Rockefeller Productions makes it for families to attend the theatre all together. Located off of Union Square East, families with young children (and strollers) can skip out on the chaos of the Times Square theatre scene. Once inside, little ones can pick up a crayon at the Paddington coloring table and color the titular bear while waiting for the show to begin. As expected, sweet souvenirs are also available; many of the youngest audience members excitedly watched with a plush Paddington in their lap. The staff all seamlessly contribute to an hour at the theatre being a heartwarming family event, free of the usual stress in the theatre district.