On This Side of the World

Off Off Broadway, Musical Revue
Runs through 5.12.19
Access Theater, 380 Broadway 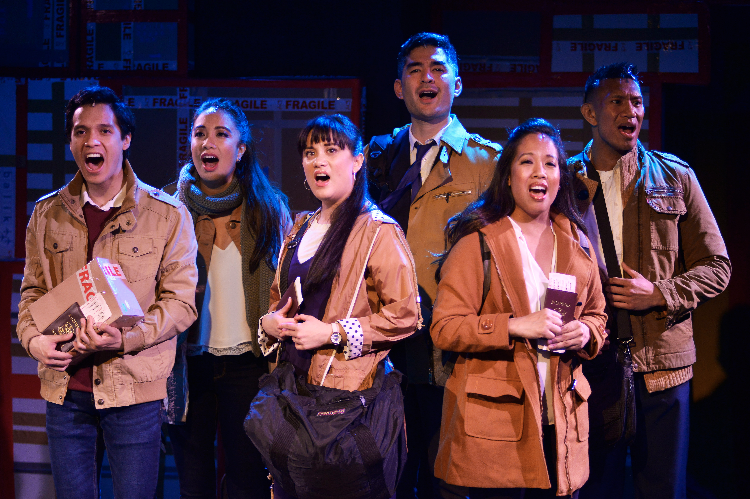 Michael Protacio, Jaygee Macapugay, Diane Phelan, Kevin Scheuring, Joanne
Javien, and Albert Guerzon in On This Side of the World. Photo by Michael Kushner.

BOTTOM LINE: Although a few of the inside jokes may go over some heads, you don’t have to be Filipino-American to be deeply moved—you just need two ears and a heart.

Filipinos who live and work overseas are so common that there’s an official term for them: Balikbayans. Unlike permanent immigrants however, Balikbayans always consider the Philippines their true home. After all, "balik" means return and "bayan" means country (full disclosure: I know this because I’m Filipino-American).  It’s rare to see a production entirely focused on the Balikbayan experience in the United States. But considering that there are nearly a quarter million Filipino-Americans in and around New York City, On This Side of the World is a musical revue that feels not just welcome, but long overdue. (Insert joke here about Filipinos always being late.)

Although the top of the show is supposed to reflect a plane of new immigrants taking off for the States, it’s easy to confuse the opening sequence for a chorus of angels. There are indeed plenty of velvet-voiced Broadway standouts in this all-Asian American cast, yet none of them appear disconcerted by their downtown location. On the contrary, all actors seem thrilled to contribute their heavenly voices to stories that closely reflect the story of their own families, and to finally portray authentic characters (not just shoe-hoarding first ladies) that look just like them.

Composer and lyricist Paulo K Tiról has a gift for crafting love songs in all styles and genres. From torch songs to bubblegum pop, romantic ballads to power anthems, each unique song reflects the varied individual experiences of Filipino immigrants. There are several standouts including "Ay, Americka," a hysterical comedic operetta featuring Diane Phelan and Joanne Javien as church ladies who gossip—gossip being the unofficial Olympic sport of the Philippines. "Rice Queens" features Michael Protacio, a man who is thrilled to discover that he’s a hot commodity in a gaysian fetish extravaganza worthy of Manila Luzon herself!

There are also appropriately somber moments, including a duet between two of the most visible and stereotypical Filipina professions in New York—a nanny and a nurse, played by the luminous Jaygee Macapugay and Joanne Javien. The two reflect on their mixed feelings of being a traditional “light of the home” with families other than their own. The gravity of this contemplation is nothing compared to the tear-jerking “In This Kitchen,” a culinary ode to grandmothers who once fed us and have now passed on. “My Mother is an Immigrant” is a particularly layered song, wherein a young girl grows into a young woman, and reflects upon her traditional immigrant mother's desires for assimilation. Sobs became as audible as applause, while songs vacillate effortlessly across the wide spectrum of emotions.

Tiról's choice to create a revue of songs rather than a traditional production is wise, since it allows him the freedom to explore a variety of songs and moods that accurately reflect the complexities of the immigrant experience. Guided by the skillful direction of Noam Shapiro, the song cycle underscores how each experience is wholly unique, so that each song begins to feel like a love letter to an individual American dream. And while it’s a shame that this dynamic production was only up for two weeks, there’s little doubt that it will find new life after its debut. On This Side of the World may play best with immigrant audiences, but the themes of separation, love, and perseverance are relatable even to those who have never set foot outside of their home country. Audiences won’t be able to stop cheering (when they’re not weeping) for this ambitious underdog of a show.

(On This Side of the World played at the Access Theater, 380 Broadway, from May 2 through May 12, 2019. The running time was 1 hour 45 minutes with an intermission. Performances were Thursdays and Fridays at 8, Saturdays at 2 and 8, and Sundays at 8. Tickets were $30 and were available at artful.ly or by calling 212.966.1047. For more information visit noamshapiro.com/three-hares.)