Night of the Moles 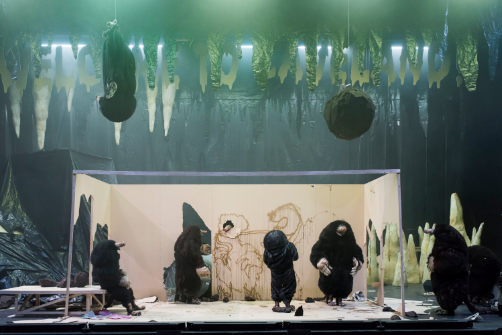 BOTTOM LINE: Playful and sincere, Philippe Quesne's Night of the Moles is a fantastical look at life, more specifically life as a group of giant moles who can play the bass.

On the surface, Philippe Quesne’s Night of the Moles looks like a group of people in mole costumes shuffling about onstage, interacting in mole-ish ways, and occasionally picking up instruments to play otherworldly music. And that’s exactly what it is. Yet if you dig a little deeper, you’ll likely discover a wonderfully chaotic, funny, heartwarming, and essentially human experience that gripped my attention from the very first mole.

Night of the Moles has little of what can be considered standard plot, as it is more a sequence of events that unfolds moment to moment. Throughout, we bear witness to what the life of a mole is all about: moving rocks, devising tunneling plans, mourning the death of a mole friend, celebrating the birth of a mole child, facing subterranean adversity, enjoying mole sexuality, joining a rock band, eating worms, and dealing with ennui.

There are rarely any intelligible words spoken beyond grunts or groans, and yet every intention of each mole is made perfectly clear by the performers. In fact the true wonder of this production is that there’s very little attempt at hiding that these creatures are clearly actors in mole costumes, yet the construction of the costumes combined with the commitment of the physical performances makes you believe in and see these lumbering humanoid moles. Like any stellar commedia mask or Henson puppet, each snout, whisker, claw, and patch of fur is crafted to suggest distinct personalities, with the performances bringing these personalities to life.

Each mole has a role in the group, from the stern leader to the wizened elder to the dopey chum, and watching them all wordlessly interact in this little mole society is an absolute joy. Some of my favorite moments were times of stillness and silence, when it felt like the moles didn’t know what to do next. Then one would have the spark of inspiration and break through the stillness with something wild and silly, like riding a motorized scooter in long, lazy circles to the amazement of the others. The action is scored by theremin, bass, guitar, and drums emitting vast prog punk sounds, from low cosmic hums to head-banging beats, all played in inventively mole ways. Most if not all of the moles pick up an instrument at some point, and each are as impressive musicians as actors.

The wonderfully chaotic energy is carried across all facets of design—not just the costumes and performance, but the music and set as well. Greeting you as you enter the theater is a large, rectangular box made of plywood and 2x4’s, positioned downstage center and flooded with stark lighting so that you can barely see the large playing space behind it. Once the first burrowing claw pops through, the idea of the wooden box as an earthen space where these mole people live becomes clear. The moles interact with this set as much as each other, bursting through the wood, painting it, or taking a pick-ax to it, until they have broken it down to its bare beams, and the show has broken out onto the rest of the stage, revealing a cavernous set of styrofoam stalagmites called Caveland.

All of this is not only done in tandem with hilarious physical bits and groovy punk rock music (and of course in those mole costumes), but also with such rambunctious energy that you’re never sure what wild mishaps are 100% planned or just a series of well-handled happy accidents. This concept of constantly demolishing and changing the set helps the moles create a delightful sense of anarchy, and keeps the show moving at a fluid pace.

While Night of the Moles only had a short two-day run, if you ever run across it it's worth checking out, especially if you enjoy playful experiential theater, or something a bit on the experimental side, and want something you’re unlikely to find again. Think something like Cats the Musical, but instead Moles the Punk Pantomime.

Night of the Moles is conceived, directed, and designed by Philippe Quesne. Costume Design by Corine Petitpierre.