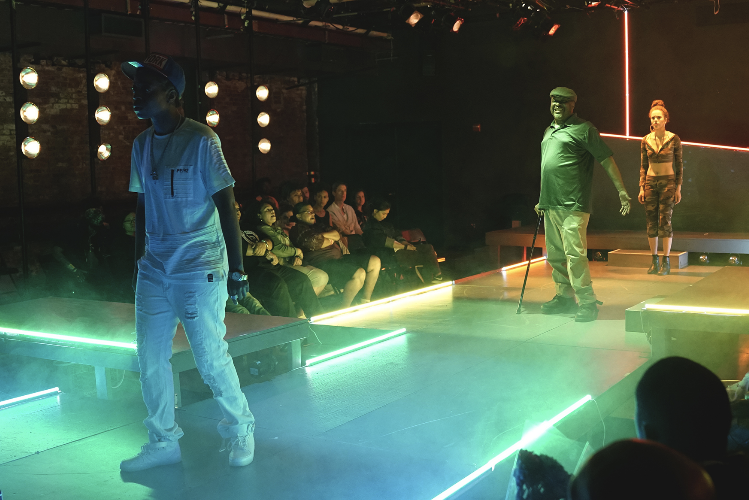 BOTTOM LINE: A kinesthetic, complex story about the history of queer life in NYC, told in the style of hip hop scratching.

The downstairs theatre has always been my favorite space at La MaMa. A storied past seems to permeate its jagged brick walls. Set up to be an immersive experience, Messiah leads its audiences in and around the dance floor of a club, where different layers of this complicated story will unfold. The audience first gets to party and dance with the performers, and then the dust settles, we become more acquainted with the environment, and we start to breathe in the story.

The structure of Messiah is non-linear, so you find yourself picking up puzzle pieces as we meet each player in this sagacious tale, one that centers on our titular protagonist, whose journey becomes the main thread we follow. As we travel back and forth in time—between the 60s and the early 2000s—we eventually get a clearer picture of Messiah—the girl, the man, the DJ, the human with flaws, struggles, and regrets just like everyone else, and we witness a growth against the backdrop of the changing political climate of NYC.

DJ Messiah (Jiggy Jada) was born Malika, or "Young" (Shaa Kettrles), the child of Belinda (Marie-Louise Guinier) and Curtis (Rodrikus Damon Springfield), two ex-Black Panthers members. After Belinda’s incarceration, Curtis’ mistress Maybelline Champagne (Ianne Fields Stewart), a trans dancer from the Starland strip club, moves in to take care of them, and becomes a maternal figure to Young Malika. As a teenager Young starts transitioning, dressing in "boy clothes" and taking the name of Messiah. Young is only discovered to be biologically female when a friend discovers the period stain on their shorts during a basketball game.

It’s truly commendable that playwright/director Nia Witherspoon has created a nuanced, complex, and gradual journey for a trans character. Instead of showing us a simplified version of self-discovery, the script takes its time and allows the character to be vulnerable. One interesting aspect is that two actors—Jada and Kettrles—play the part of Messiah. We watch the present-day DJ recount and watch himself in the past, making it easy for us to step in and out of the scene as well, with the protagonist himself as surrogate guide.

The use of memory in storytelling is staged well. In fact, the manipulation of time is a standout point in this production, which uses the convention of scratching as a conceptual hook. "Scratching," a staple in hip hop, is a technique that allows DJs to manipulate the playback on a vinyl disc. In Messiah, scratch becomes a word that means a jump in time, a retelling of a memory, or sometimes a safe word that stops a memory from being replayed. We hear it from DJ Messiah, but also from Curtis and other characters.

Messiah also features a team of outrageously talented actors who captivate with their nuanced and electrifying performances. The rhythm of the play goes from poetic to naturalistic and back again. It takes a group of truly generous and committed performers to hone the show like a well-oiled machine. There isn’t a dull moment in the production.

Besides jumping back and forth in time, we also see different moments layered on top of each other, each distinctive in style. The production is stylistically kaleidoscopic: the present-day scenes are tied with the club, as well as to Messiah operating behind the DJ booth, while the memory scenes have both highly stylized, movement-based moments from the Starland dancers, as well as beautifully grounded moments between DJ Messiah and Belinda, which are some of the most tender scenes).

While I appreciate this ambitious production and complex story (indeed, previous iterations were called The Messiah Complex), there are some issues with clarity—the abundance of information makes it hard to retain all the contextual details. Along with DJ Messiah's perspective, we also see the story from other points of view as different characters take their own strolls down memory lane, making it difficult to keep track of the many threads of the story. There are times when it feels more like binge-watching a miniseries rather than a play. But without the aid of the kind of visual information that’s easier to provide on television, the clarity of the story can suffer.

It might be helpful to become familiar with the history of black communities, as well as with the 70s NYC hip hop scene, in order to fully appreciate everything Messiah has to offer. It's a challenging production to say the least, one that truly requires undivided attention in order to understand all the details. Messiah is not entertainment, although there are wildly funny moments. It's a poignant take on a part of a history that continues to haunt us, and a call to action for all of us to understand, to see, to do better, to become kinder human beings.