Off Off Broadway, Classic/Adaptation
Runs through 6.1.19
The Flea, 20 Thomas Street 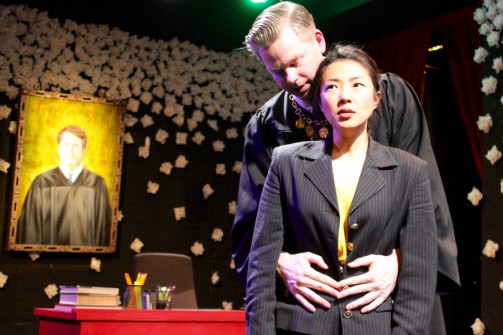 With its anti-heroic characters, ethical conundrums, and questionably “happy” ending, Measure For Measure stands as one of Shakespeare’s most problematic works. It is perhaps this same ambiguity that gives the play its endurance, as countless productions have used Shakespeare’s plot to examine their era’s deepest social concerns. In this post-Trump, post-#MeToo landscape, the play’s themes of executive corruption and sexual double standards hold added weight, and it is these issues at which Spicy Witch’s Measure For Measure takes direct aim. Setting Shakespeare’s play amidst modern political scandal, this adaptation highlights the moral dilemmas we still face.

Initially unmoved by her pleas, Angelo uses Isabella’s desperation against her, offering her Claudio’s freedom in exchange for her virginity. As Isabella struggles with this ultimatum, Justice Vincentia returns to Vienna, posing as a reporter to spy on her citizens and monitor Angelo’s rule. With the help of deposed brothel madam Mariana Overdone (Sarah Rosengarten), Isabella and Vincentia join forces, launching a plan to deceive Angelo, secure Claudio’s freedom, and keep Isabella’s purity intact. When their ruse is revealed and Angelo seeks revenge, Isabella must speak out to unmask systemic corruption and protect that which she holds dear.

In both its trappings and interpretation of Shakespeare’s text, Spicy Witch’s Measure For Measure inhabits our present cultural landscape. The plot’s controversy and power imbalances lend themselves remarkably well to the production’s judicial and journalistic backdrop. Isabella’s persistence and Angelo’s smarmy entitlement seem ripped from the recent Kavanaugh-Ford hearings; lines like “who will believe thee?” fall especially hard on modern ears. The blending of jilted bride Mariana with the bawdy Overdone streamlines the plot while making some finer points on male hypocrisy, but does not fit as seamlessly into the arc of Shakespeare’s story. The production’s fast pace, common to modern Shakespeare adaptations, adds urgency and dark humor to the play’s surreality, but can backfire when actors rush through meaningful dialogue.

Steeped in carnal reds and pristine whites, Lindsay Genevieve Fuori’s set furthers the parallels by invoking the color scheme of dystopian dramas like The Handmaid’s Tale as well as common archetypes of purity, power, and lust. Portraits of Kavanaugh and former Supreme Court Justice John Jay flank both ends of the stage, silent witnesses to the action. This choice is far from subtle (especially when female characters deface the paintings with lipstick); arguably, the play’s content could stand alone as a commentary on our toxic political moment. Nonetheless, the presence of these images can prove uncannily powerful: alone in Angelo’s office but for the Kavanaugh portrait, Isabella’s “to whom should I complain?” echoes the desperation of every victim in a disbelieving, unsupportive world.

By placing its action in familiar settings, Spicy Witch’s Measure for Measure comments as pointedly on its surrounding culture as Shakespeare’s did on his. If theatre is meant as living critique of the world around us, the popularity and newfound relevance of such classics should come as no surprise, as today’s artists use these archetypes to navigate the thorny circumstances in which they find themselves. Though the play’s questions may never find a neat resolution, such attempts to plumb their nuances can spark ingenuity and, hopefully, provoke deeper understanding.

(Measure for Measure plays at the Flea Theater, 20 Thomas Street, through June 1, 2019. The running time is 90 minutes, no intermission. Runs in rep with The Virtuous Fall of The Girls From Our Lady of Sorrows. Performances (of one or the other) are Tuesdays through Fridays at 7; Saturdays at 3 and 7. See website for exact schedule. Tickets are $25 and are available at theflea.org or by calling 212-226-0051. For more information visit spicywitchproductions.com.)