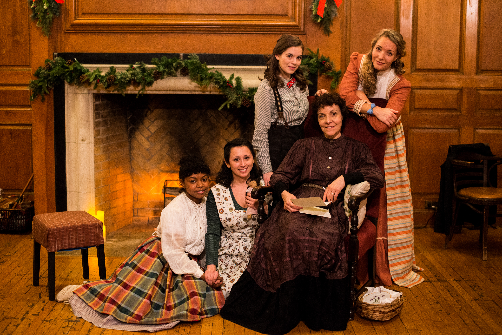 Louisa May Alcott’s nineteenth-century novel Little Women has stood the test of time as a coming-of-age story, with countless young women seeing their joys and struggles reflected in those of its heroines Meg, Jo, Beth, and Amy March. As such, Alcott’s story has received numerous stage and screen adaptations (including a new film this month), with each version offering a different take on the novel’s themes of family, self-realization, and female strength. With its focus on feminist renditions of classic works, Hedgepig Ensemble Theatre expands on this tradition, its holiday-themed adaptation of Little Women infusing Alcott’s tale with seasonal spirit and ample heart.

Director Brooke Viegut and Scenic/Prop designer Tekla Monson build the show’s atmosphere as soon as we enter, transforming the wood-paneled parlor of South Oxford Space’s Great Room into the March household at Christmastime. During the pre-show, actors decorate the space’s mantles with pine boughs, arrange LED candles around its hearth, and string popcorn garlands for a free-standing Christmas tree. Hedgepig’s concession stand offers seasonal treats including hot cocoa, eggnog, and Christmas cookies, and members of the company invite the audience to help them make holiday cards for children at Brooklyn Hospital Center, a local community partner. And several times during the show, actors use Beth's beloved piano to lead us in carol singalongs (lyrics are in the program). These trappings are instantly inviting; to paraphrase one young audience member, they make for a “very cozy” alternative to traditional setups.

Seated on three sides of the action, we immediately find ourselves steeped in the household’s fast-paced dynamics and the story’s highlights. With the family’s circumstances reduced since their father’s enlistment in the Civil War, the March girls and mother Marmee (Desirée Baxter) persevere through hard work and devotion to each other. As Marmee performs charity work for their town’s poor and soldiers, eldest sister Meg (Sara Hymes) helps raise her sisters while working as a tutor for a wealthy family. Tomboyish Jo (Rachel Schmeling) struggles to manage her sharp temper while aspiring to publish the plays she writes. Amy (Samanthia Nixon) the passionate youngest sister, dreams of becoming an artist but struggles with the realities of school and the difficulties of growing up. Finally, acting as the piece’s narrator, shy, tenderhearted Beth (Ashley Kristeen Vega) cherishes her home life but fears her sisters’ ambitions will sever the bonds that sustain them.

The cast’s skill and chemistry allows each girl’s personality to shine through, leavening the piece’s potential for sentimentality with commitment to its emotional truth. As guests within their home, we witness the March sisters navigate such triumphs and challenges as Amy and Jo’s sibling rivalry, Meg’s brushes with high society, Beth’s illness, and the girls’ connection with their neighbor Mr. Laurence and budding relationships with his grandson Laurie and Laurie’s tutor Mr. Brooke. Focusing on the women’s stories and anchoring the piece in their immediate surroundings, external figures such as the Laurences and the girls’ wealthy Aunt March are only referenced: any instances involving these characters occur offstage as the cast quickly enters scenes in their wake or implies outside presences through letters or glimpses from the parlor’s windows.

True to the company’s mission, Hedgepig’s version highlights the story’s themes of gender equity and social awareness, revealing Little Women’s continued relevance to modern viewers. A wise counselor in her daughters’ lives, Baxter’s Marmee is ahead of her time in several ways, stressing the importance of education, community service, and responsible action. More pointedly, each of the sisters’ aspirations, from Beth’s cheerful domesticity to Jo’s literary pursuits, receives equal validation, underscoring the worthiness of all vocations and the importance of choosing one’s own path to fulfillment. Hedgepig’s ancillary elements, such as pay-what-you-can nights, partnerships with local bookstores, and talk-backs on such topics as constructive female anger and parity in Young Adult literature, carry the story’s themes beyond the performance and into our daily lives.

In its festive take on Alcott’s classic, Hedgepig maintains Little Women's cherished familiarity while broadening its appeal to modern sensibilities. The result is roundly appealing, allowing both longtime fans and new generations to delight in its message. Whether you’re seeking family-friendly entertainment or a simple but poignant tale, audiences of all backgrounds will enjoy this holiday visit to the March home.