John Kelly: Underneath the Skin

Written and Directed by John Kelly 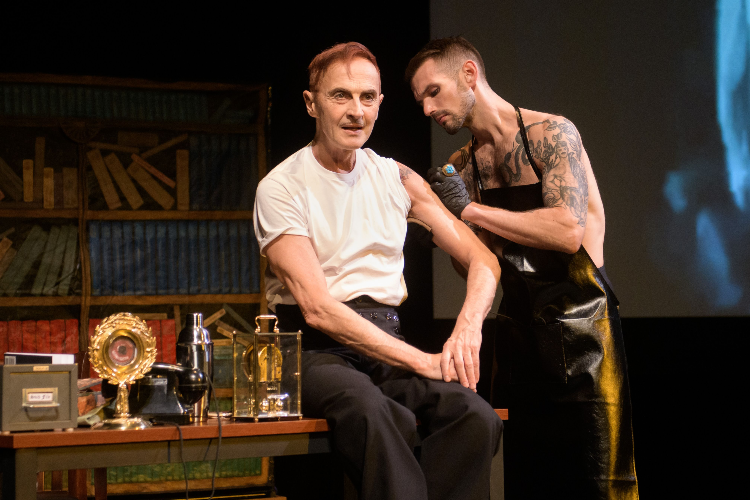 John Kelly and Chris Harder in John Kelly: Underneath the Skin. Photo by Ian Douglas.

BOTTOM LINE: Master of reinvention Samuel Steward is the fascinating subject of this less-than-fully realized drama.

When the audience enters the theater to see John Kelly: Underneath the Skin, they’re greeted by an amazing slideshow, a pastiche of old photos interspersed with news clippings about pre-Stonewall raids of one-or-another gay bar. It’s a wordless reminder—presented on an enormous screen in the middle of the stage—of the not-so-distant past, when coming out was not an option for most LGBTQ people. The largely-undated photos are beautiful, showing men and women of every race and ethnicity hugging, kissing, and snuggling a same-gender partner. These are profoundly intimate moments that were likely captured by a trusted friend-cum-photographer, and they form an essential backdrop to the story that Obie-award winner Kelly will tell about Samuel Steward (1909-1993), a queer social climber and college professor turned novelist, tattoo artist, and illustrator.

As an adolescent, Steward considered himself abnormal and, we’re told, expected to have to choose between having a career and being loved. Then, as a teen, he discovered the work of Havelock Ellis, whose groundbreaking research into human sexuality provided Steward with both comfort and insight into his own desires. This newfound knowledge prodded Steward to find others like himself—misfits due to sexual orientation, social class, or unusual intellectual proclivities—and he penned hundreds of letters to the era’s famous and infamous. A slew of personal contacts resulted; an affair with pop icon Rudolph Valentino, dubbed the “pink powder puff” by the Chicago Tribune, was the first of many assignations with notable men of stature and fame. In fact, his near-constant letter writing led to friendships with Gertrude Stein (played by Lois Pashalinski on screen, the only friend of Steward’s who is depicted in the play) and Alice B. Toklas, Thomas Mann, Thornton Wilder, and André Gide.

To say that Steward lived a storied life is a gross understatement. A legendary drunk who nonetheless held down professorships at several prestigious Chicago colleges, Steward got sober in 1947. But his love-hate relationship with power and legitimacy gnawed at him. By the late '40s, he decided he loathed university teaching and “wanted to spit in the face of all authority.” Personal reinvention followed: In short order he became one of the country’s most renowned tattoo artists, a role that gave him deep insight into the human condition. Still unhappy in the Midwest, however, he relocated to San Francisco and picked a new nom de guerre, Phil Sparrow.  Later, when the city’s tattoo parlors were closed due to the spread of hepatitis, he took on a new persona, and as Phil Andros, penned dozens of erotic novels for gay male readers. Throughout, he kept diaries describing his everyday antics in copious detail; he also drew illustrations of what he saw and experienced.

Kelly relies on these accounts, often reading from them as he presents the ins-and-outs of Steward’s remarkable life. This, sadly, is where the play falters. It’s unclear if Kelly is under-rehearsed, or if he is trying to present Steward as shy or uncomfortable in the spotlight. Regardless, as he trips over words, the momentum and focus get lost. In addition, there seem to be numerous gaps in the history. How, for example, did Steward react to the Stonewall Rebellion? Or the AIDS crisis? Or the first signs of a gentrifying Castro? What about Harvey Milk and the reopening of the city’s tattoo parlors? Since Steward did not die until 1993, these seem like odd omissions.

Needless to say, Samuel Steward led an incredible life. Unfortunately, Underneath the Skin does not do him justice. In fact, the play is a tease. Perhaps that’s intentional. Nonetheless, there’s more to be said about Steward, a man who found his place while defying convention and thumbing his nose at propriety. Let’s hope another explication of his existence is forthcoming, and soon.

(Underneath the Skin played at NYU Skirball, 566 LaGuardia Place, October 11 and October 12, 2019. The running time was 80 minutes. For more information visit nyuskirball.org.)