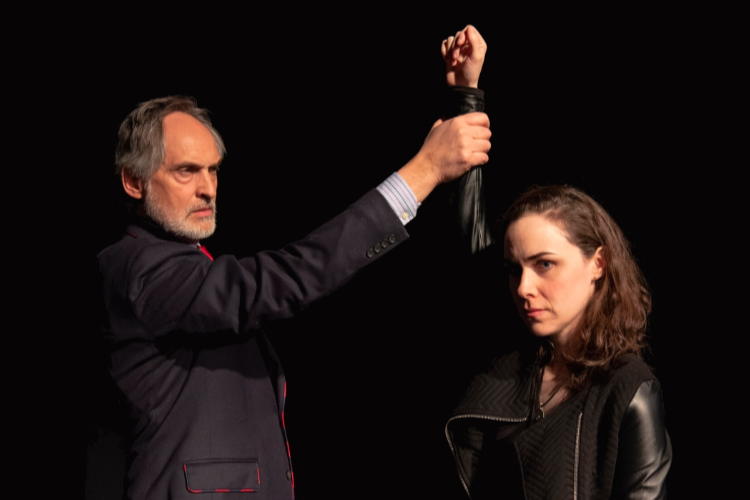 BOTTOM LINE: A well-acted rendition with a breakneck tempo that works both for and against it.

I’ve now seen three female Hamlets in a row in the past year. First came Michelle Terry in the Shakespeare’s Globe's gender-bendy take, in which she played the Prince of Denmark opposite a male actor’s Ophelia in a corset, neither performance quite making the character’s gender identity explicit. Then there was a Shakespeare in the Parking Lot downtown production of Hamlet, with a Princess Hamlet and her same-sex love interest Ophelia. Now comes the feisty theatre company Hamlet Isn’t Dead’s astutely acted but ultimately under-cooked version offering a new Princess Hamlet, this time opposite a male actor playing a male Ophelia.

So where can you catch a male actor as Hamlet should you pursue such a retro option? Try every other night, because this production actually features a pair of actors, Megan Greener and David Andrew Laws, alternating performances as the titular Dane and the doomed Ophelia.

There’s a lot going for Hamlet Isn't Dead's sharp, snappy production, directed with refreshing clarity by James Rightmyer Jr. on a W-shaped stage that juts out above the heads of patches of audience members. Rightmyer’s rapid staging avoids the typical pitfalls of black-box direction; there’s no time wasted on transitions and the audience always knows where to look.

Smart, specific choices abound in this Hamlet’s opening minutes, with brightly original interpretations of even the least significant of relationships: Horatio (Callee Miles, who sings marvelously in a pre-show set of thematic tunes) and Marcellus (David Anthony Hentz) have a delightfully specific interplay when they tell Hamlet about that familiar-looking ghost on the battlements. Kendra Lee Oberhauser’s Gertrude offers a fraying warmth to her daughter; there’s strength somewhere in there, but it’s been muted by grief and her new husband-king Claudius’ power. When Hamlet speaks to her father’s Ghost (James M. Armstrong, boasting a winningly booming bass voice), Judy Kagel’s spotlight pulses in and out, as if suggesting this spirit’s tenuous connection to his earthly existence.

The first few scenes hurtle by with gripping flurries of tension, helped along by the actors’ perilous proximity to the audience (Gertrude died an inch or two from my feet). When Claudius (Don Meehan) and Hamlet exchange seething greetings in their first moments together, they talk across sections of the audience, their disdain palpable in the audience-inhabited space between them.

And these scenes do hurtle: “Has that scene always been so short?” is something I don’t usually find myself wondering throughout most Shakespeare productions. Shakespeare’s language whizzes by too quickly to absorb, but the pervading sense of words, words, words in place of poetry promotes Hamlet as a sort of thriller, high on action and suspense.

But eventually Megan Greener’s gruff, brisk, and quippy take on Hamlet, best when her rageful bereavement takes center stage in early soliloquies, just gets too far ahead of the audience too fast. There’s seldom opportunity to watch this Hamlet find the right words to say—even “to be or not to be” feels like a speech that Hamlet arrives ready to deliver, like she's in the middle of a relay race. The drama surges ahead, but the play’s existential ache—which this cast is surely good enough to put across—gets utterly submerged in the charge to the finish line.

A program note explains that the casting rotation serves to keep actors on their toes while performing in an overdone play. It works, I guess: a couple of actors repeatedly struggled to remember to use Hamlet’s female pronouns. But it’s not clear what the gimmick does for the audience (especially on the gender-traditional nights when Laws plays Hamlet) since the alternate casting can’t be experienced at all without seeing multiple performances. And there’s little surprise in Greener’s few scenes with Laws—Ophelia’s despair at Hamlet’s supposed madness comes across as monochromatic, even though Ophelia’s early brotherly rapport with Laertes (a smoothly spoken Greg Pragel, who also stages the lively fights) is a fun twist. If anything, the production’s external emphasis on Ophelia highlights how little Shakespeare invests in her (or him): when you’re asked to look extra closely, there isn’t much new there to see.

The Hamlet/Ophelia switcheroo, as a result, isn’t really disorienting at all, except to some of the people onstage. What’s more unsettling and radical about this production is its gumption in tossing aside the standard treatment of Hamlet as a figure trapped by doubts, unable to avenge the old King’s death and take out Uncle-Stepdad Claudius. By cutting the crucial back-to-back pair of monologues in which Claudius confesses to killing Hamlet’s father and Hamlet very nearly gets up the nerve to take revenge, Hamlet’s great delaying doesn’t really register and there’s no longer any evidence that Claudius actually murdered anyone.

Is this Hamlet truly mad then, even as she claims to perform madness? Does her father’s death really require avenging? And if not, who’s the ghost Horatio and Marcellus have also seen? (Hamlet appears to see the ghost in a different location than her companions, suggesting, maybe, that she imagines the whole paranormal encounter.)

All of these questions are fair game for consideration, even if they don’t emerge wholly credibly from the play itself. But this production doesn’t only tear up the status quo; it tears through the text at such a pace that the questions are left unexplored. Even when speeding past, Hamlet Isn’t Dead stands among the most impressive and insightful of the New York Shakespeare scene. And if they would ever so slightly ease up on the gas, we could fully admire the view.