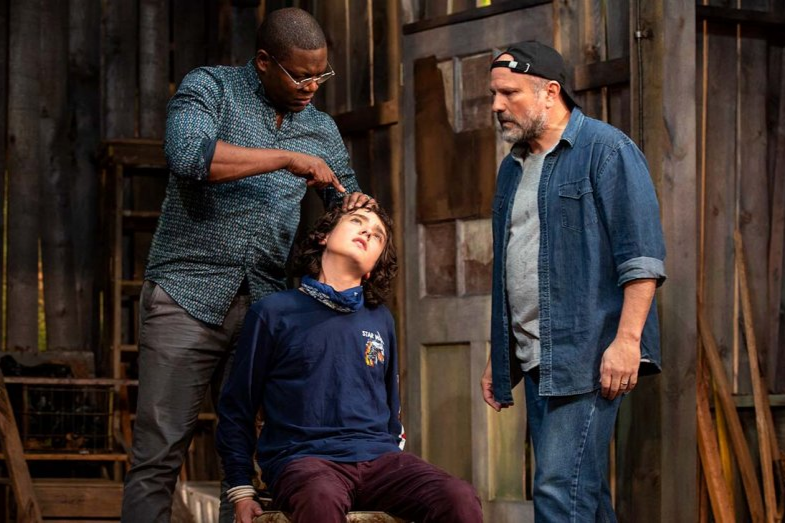 BOTTOM LINE: Enrico Colantoni fans might enjoy Fear if they're willing to suspend their disbelief.

If you're a fan of Enrico Colantoni (Veronica Mars) or Obi Abili (Irish Rep's The Emperor Jones), you probably won't regret seeing Fear. There is certainly enough in the new thriller by Matt Williams to keep you intrigued and guessing for its short 90-minute run time. But there's not enough for a great play.

Fear takes place during a search for an eight-year-old girl who has gone missing. Phil, a plumber (Colantoni), ties up a teenage boy, Jamie (Alexander Garfin), in a shed to question him about the girl's disappearance. A professor, Ethan (Abili), wanders in and becomes involved. Ethan has no reception, so he can't call for help, but the methods used to keep him there require some suspension of disbelief. According to Phil, Jamie is a disturbed boy who kills cats and might have been the last one to see the girl. At times, Phil seems unhinged himself, so it's difficult to know who is telling the truth.

What Williams does well is make us suspicious of everyone at times and question whether this boy is evil, the victim of a terrible childhood, or just in the wrong place at the wrong time. But Williams also tries to do too much to make the play politically relevant, and when he ventures into the class differences between Phil and Ethan, it makes for unbelievable dialogue. Phil and Ethan stop far too often to lecture, given the circumstances. Tea Alagić has directed the adult actors to do the most with the script, though Garfin is a bit too flat to properly scare the audience into imagining what he's capable of doing. Colantoni seems to especially be relishing playing this role that is not unfamiliar to him.

At least the play has a strong ending that doesn't completely tie things up. It's also been given an impressive production, with suitably creepy design: set (Andrew Boyce), lighting (D.M. Wood), and sound (Jane Shaw).

The cast is Obi Abili, Enrico Colantoni, and Alexander Garfin.