Everything Is Super Great 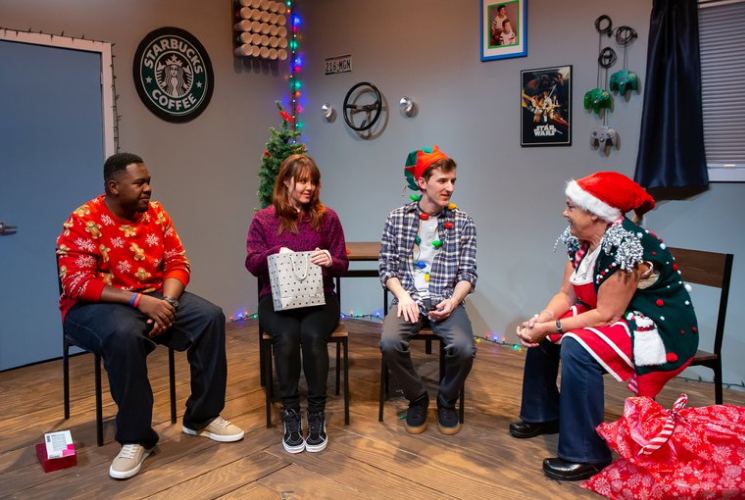 Xavier Rodney, Lisa Jill Anderson, Will Sarratt, and Marcia Debonis in Everything is Super Great. Photo by Hunter Canning.

BOTTOM LINE: A small gem of a holiday play for lonely people.

If your favorite Christmas song is "Have Yourself A Merry Little Christmas"—meaning you like your holiday entertainment tinged with sadness—Everything Is Super Great is the show for you this holiday season. As you might guess, everything is not super great for the characters in Stephen Brown's play.

There's Tommy (Will Sarratt), a 19-year-old Starbucks barista whose older brother went missing from college. His mom, Anne (Marcia Debonis), puts on a cheerful face while she makes Pop-Tarts and works at Walmart, but it's clear she's hurting too. She hires Dave (Xavier Rodney), an art therapist, for Tommy, not realizing that Tommy is actually his first client, and that Dave is dealing with heartbreak of his own. Finally, Alice (Lisa Jill Anderson) works at Starbucks with Tommy and has to take care of her mother who has Alzheimer's.

Yes, this is all as depressing as it sounds, but don't worry, Stephen Brown injects the dialogue with just the right amount of humor. And the play is uplifting in the way everybody helps each other, without any unrealistic overly happy resolutions.

The cast members are all deeply believable. Debonis, who you may recognize as Jenna Rink's secretary in 13 Going on 30, delivers a particularly moving performance. There is one scene in which she asks Dave if she can try one of his therapy techniques; it's a beautifully written, acted, and directed depiction of a mother's grief.

I'm not sure if Brown has ever worked at a Starbucks, but as a former barista, I appreciate that he got a lot of details right. It may seem like a small thing, but I've been at shows with Starbucks inaccuracies that took me out of the moment.

Brian Dudkiewicz's set cleverly fits all the locations into Theater C's small space by lighting up signs on the wall, such as Starbucks or Walmart, to let us know where we are. Janet Bentley's sound design includes plenty of Christmas music to get you in the holiday spirit. Unfortunately, there are only a few performances remaining, so I suggest you get to 59E59 by Saturday.

The cast is Will Sarratt, Marcia Debonis, Xavier Rodney, and Lisa Jill Anderson.