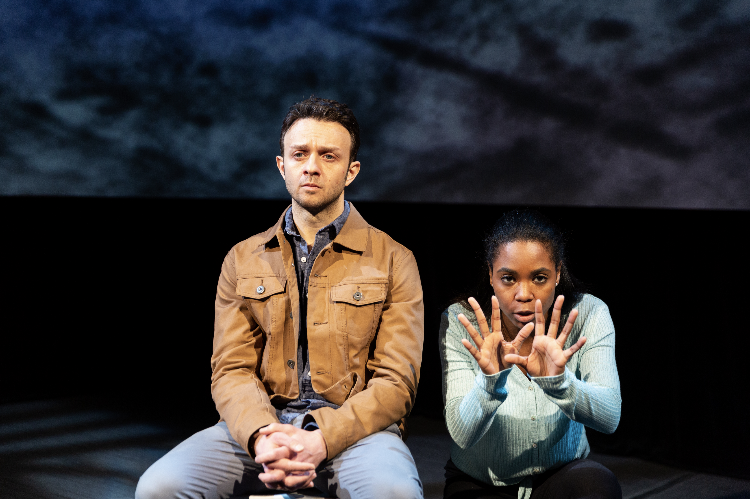 BOTTOM LINE: A two-person tour de force about the grief and guilt-ridden aftermath of a mass shooting.

It seems like almost every day there’s another mass shooting, an epidemic that plagues the United States more than any other country in the world. While artists have been creating pieces of theatre about mass shootings since Columbine, few are as poignant as Entangled. It’s rare to find a play that approaches the subject with the candor, vulnerability, distress, and complexity this hot-button issue requires; Entangled is just that piece of theatre.

Bradley (James Kautz) and Greta (Naomi Lorrain) are two people from different walks of life, two people whose lives likely would never have intersected were it not for the fact that Bradley’s brother shoots up a  planetarium, killing Greta's young daughter. While Greta is the embodiment of rage and grief, Bradley's feelings of guilt, frustration, and hopelessness turn his world upside down. As a therapeutic exercise, he begins writing letters to the many people whose lives were changed by his brother's horrific actions, but he never sends any of them—except the one to Greta. Written and performed as two intertwining, almost internal, monologues, Entangled is a gut-wrenching look at the aftermath of a mass shooting, and how years later wounds are just as raw as they were that first day.

Written by Charly Evon Simpson and Gabriel Jason Dean, this show is a poignant look at two people with intimate relationships to the same devastating event. With two different perspectives coming from two different writers, it’s easy to feel a need to proceed with caution, but here Simpson and Dean have created a seamless piece that features many complex sides with tact. These distinct voices and characters transform this journey from what could have been just another sad story about a tragedy into one of collective rage.

Skillfully performed by Kautz and Lorrain, Entangled is a showcase for both extremely talented actors. Kautz’s Bradley is every bit as emotionally restrained as you would expect. His guilt for not being a better brother, for not stopping the shooter, gnaws away at him, in turn eating away at you. Though he never quite breaks through that wall of pain and frustration, Kautz’s performance of Dean’s writing is an outstanding reflection of helpless guilt.

And as Greta, Lorrain is a triumph. Seen last in an exceptional performance in Behind the Sheet, Simpson’s words flow out of her in a smooth, seamless way. Riddled with grief, she embodies a mother’s sorrow of losing a child with red hot anger, one who lashes out (or laughs at) anything that comes near her, all while being driven by the continual emails from Bradley. Simpson’s dialogue is effortless and natural, leaving space for Greta to comment on how black women are seen by the rest of the world and what they are expected to be.

Director Kate Moore Heaney and her design team have created an empty, ethereal place, lacking time and space, to tell this painful story. Andrew Diaz’s sparse scenic design, Christina Watanabe’s almost sci-fi lighting, and Kate Freer’s stunning projections of the galaxy, all combine to let Entangled exist in a void, where, through Heaney's soft touch, the actors seem to just float. Costumes by Angela Harner are simple and tasteful, easily placing the characters in various times and places of comfort, letting us hear their most intimate thoughts as if they were home alone.

Entangled features must-see work by both its actors and writers; it's a masterclass in both performance and playwriting. Though the direction lacks some tension, Lorrain and Kautz carry more than enough grief and guilt within themselves to push the play forward. Uniquely placed as a show about two points of view, written from two points of view, surrounding a never-ending issue, The Amoralists' Entangled is definitely one not to miss.

(Entangled plays at A.R.T./New York Theatres, 502 West 53rd Street, through May 11, 2019. The running time is 90 minutes with no intermission. Performances are Wednesdays through Fridays at 7:30, and Saturdays at 3 and 7:30. Tickets are $30 and can be purchased at amoralists.com.)

The cast is James Kautz and Naomi Lorrain.